CLAY PARKER & JODI JAMES -
THE LONESOMEST SOUND THAT CAN SOUND
​ 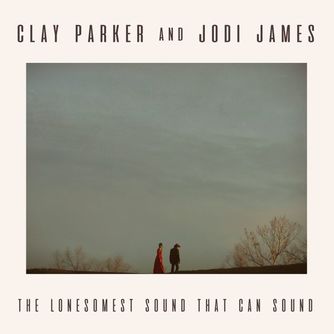 What do you get when you put two incredibly talented singer songwriters together? Sounds like the cue for an unfunny joke but it's not. We always hope the answer will be 'a duo whose combination of qualities multiplies accordingly,' a situation that is sadly quite rare, although that is most certainly not so in the case of Clay Parker and Jodi James! Their musical qualities seem to feed off each other and grow exponentially making them about as listenable as it is possible to get. Even on a recording it is easy to hear how comfortable they are in each other's company, with neither trying to be the star, but knowing the combination is a winner.
The lovely mellow harmonies and gentle musical arrangements almost hide the fact that there is a powerful sense of drama in the album. Initially it feels almost too gentle but it doesn't take long to accept that the depth of these songs is so great it is no hardship to put the whole album on repeat play!
Both Clay and Jodi are recording artists in their own right with Jodi having released one solo album and Clay three, with this excellent album being preceded by a six song e.p/mini album by the couple. The ten songs, all written by the duo, flow gently through the sparse arrangements, with often deep, dark tales that gradually inveigle themselves into the listener's consciousness
The album title came from a phrase in a Woody Guthrie lyric, something that is powerfully resurrected in the albums final track, and it's no coincidence that the couple follow the great bard's often itinerant lifestyle. It will be obvious to all who hear this album that they have absorbed many musical influences, from folk, through the blues, Americana, country, all shot through with an often deep swampy bayou feel,  culminating in a sound and atmosphere that makes them unique and easily recognizable. They are not so very far away from several of the above mentioned styles, and yet they certainly can't be placed in any of them, always keeping to their own unique, often mournful, and strangely and equally often, uplifting style, with that mournfulness translating itself into sounds of great beauty.
The album opens with the mellow of tone Easy breeze with its gentle percussion and bass allied to a melodic guitar sound before the two beautifully blended voices come in together on a gorgeous ballad. Steel guitar and an unusual keyboard sound add a strong otherworldliness to the song that already has an eerie feel because of the almost metronomic tone of the vocals. The organ sound adds to a strangeness of tone that if separated would come across as a contemporary country or folk ballad but together enhance the otherworldliness. It is followed by Katie's blues another song that includes a gentle organ sound with bass and guitar for company before Jodi's beautiful vocal comes in on the verses, joined by Clay on harmonies. It is very much a song that has a high lonesome feel, providing echoes of the 'old timey' musicians rather than a contemporary bluegrass atmosphere, adding to the albums unusual haunting appeal. A modern updating of the old time tradition if you like! The mournful Gallows tree has a gentle guitar intro on this incredibly sad 'weepie' on which their combined vocals could not really be surpassed in  evoking the sheer heartrending sadness. The haunting rural beauty and eerie unredemptive quality in some ways provides echoes of the harshness of the real world as it probably was many decades ago. Far away, again has an acoustic guitar intro, this time leading to Clays excellent lead vocal with Jodi joining him on harmonies, then the thudding percussion and bass root the song and avoid it floating away on the beautiful sound. The tempo changes a little, with the steel guitar coming in and slightly altering the whole perspective on this gorgeous rural tale that includes, as do most songs on this album, a beautiful melody. Final mention is of the final track, the stunning Killin' floor. The gentle acoustic guitar and mellow harmonies in no way prepare the listener for the epic song that gradually evolves and yet from start to finish there is very little change. Clocking in at just over twelve minutes you can be forgiven for thinking the song will disappear into its own 'ambience,' but no, the lyrics and the miniscule changes that appear throughout the song merely add to the epic nature of the story. I still can't believe that anything so slow and sparse can hold the attention for so long but after repeated listening sessions the song, as does the album in general, becomes quite addictive and I really can't work out why! Suffice to say that here we have two artists at the top of their game and the culmination of their skills that I doubt will be repeated by them, or anyone else for that matter.
Some may find the even, gentle tempo and sheer beauty of the sounds to be a little too restrained for their taste; I certainly did at first, but give the album a chance and stick with it and the rewards continue into the 'umpteenth' playing session and beyond. The fact is that this duo are so rich in talent there is no need to 'rock,' with the gorgeous, yet sparse, arrangements allowing the beautifully conceived, often dark lyrics to be propelled by the excellence of the lead and harmony vocals, with instruments such as steel guitar, mandolin, occasional fiddle and cello adding a little colour and variety to a quite stunning recording. A huge added bonus is that if you go to their website you can download the album for as little (or as much)as you choose to pay but I'm pretty sure most who hear it will want to contribute to this incredibly talented couple being able to maintain their stunning musical output.