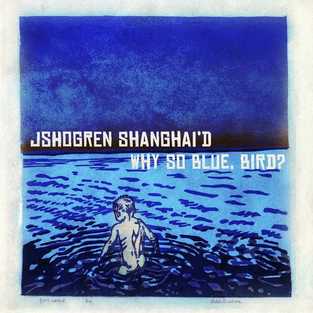 I'm not sure quite how many albums this Nobel Prize winner (look it up!) has made but I know this is at least his fifth since that 2007 award. I have them all but I still don't know which genre they, or indeed he should be placed in, such is the uniqueness of the music made by this man of many talents.
This could well be one of the first albums, in the hundreds of reviews written, that I simply can't compare to anyone else or even come close to slotting into a genre, other than 'roots' music. Forget sub genres, there really aren't any that J Shogren will even get near. It's not country, it's not blues, it's not folk and it's not really rock. O.k perhaps not 'really' rock is a little less emphatic; just not rock as we know it. If you want to, you will be able to discern at least vague elements of all of the above but never enough to be able to slot the album into a comfortable genre; in fact it could very easily be the slightly uncomfortable and slightly unsettling feel that defines this man's music. Nothing that is specific, just not comfortable, perhaps 'at times challenging' would sum it up best and yet it is not a complicated challenge, just unusual and incredibly rewarding. Certainly his lyrics do sometimes challenge and on occasions have a slightly abstract feel whilst ranging through a variety of emotions and textures, even extending to gentle love songs.
None of the generous eighteen tracks outstay their welcome either, just one approaching five minutes and the shortest being just half a minute, succinct and with no filler! There is just so much going on in this recording as well, not in terms of the arrangements, but lyrically, stylistically (despite the lack of any coherent style), melodically, harmonically, in terms of tempos and atmospheres; in a nutshell nothing like any other artist and yet I love the album and just can't stop playing the thing! His voice and lyrical depictions have great depth and his range is more than sufficient within the constricts of his excellent songs. Maybe it's that which sets him apart in as much as he writes and performs songs that suit his idiosyncratic style rather than trying to slide into the mainstream and garner mass appeal. And yet, his style is so different to what most are used to that his off centre  music could easily catch on because it is not too dense musically, includes some tremendous 'ear worm' melodies, great playing, excellent vocals and incredibly refreshing arrangements, that whilst unusual, are not so strange that people will think it 'weird!'
Some songs will perhaps start with a sparse melodicism and then be dominated by a dynamic attack that can often wait a while before making an appearance and some songs will even blend gentle melodies with the powerful dynamism that may be prompted by percussion or guitar but it doesn't necessarily follow that all of a songs instrumentation will be used in the same way or that a song will end up as it started. Phew!
The songs all have an incredibly powerful feel, some with an attacking funkiness, much of it propelled by the incredible dynamism of the instrumentation and the excellent musicianship of his support crew.  His vocals too seem to increase the power with a quite natural intensity, whether the lyrics are intense or not. Yes I know, much of the above doesn't make a whole lot of sense and is sometimes contradictory, but this is such a difficult album to get a handle of any description on that I suspect if I listen to it a thousand times there will still be new revelations causing me yet more confusion!
I've deliberately not mentioned any of the songs specifically, simply because I wouldn't know exactly which ones to pick out, such is the excellence of all. Even the little 'snippets' have their merits within the confines of this album but as I mentioned earlier there are some real 'ear worms' something you may not expect on an album of this uniqueness. Swampland, Temperance, Works, Absinthe and Audubon's birds of America are just a few that I have picked out for radio plays but there are certainly more that fit the bill for shows in the not too distant future.
Time to finish up this review and play the album again but I'm terrified that the next listen or perhaps the following one will prove all of the above incorrect, something that happens with great regularity in my confused world, but I suppose that is the effect great albums can have on the listener and this tremendous recording certainly qualifies as a great album!