THE CURST SONS - THE JUMPING FLEA 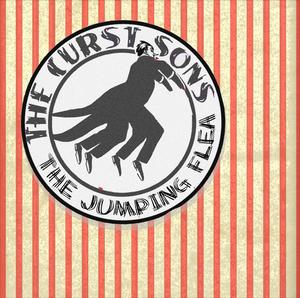 I first saw the Curst Sons perform live, as support band for 'The Boggs,' about 16 or 17 years ago, about a year after they first started. I reviewed the gig for a magazine and was far from impressed by the headliners but described the Curst Sons as 'one of the best live bands I've ever seen.' I must have seen the band dozens of times since and nothing has happened in all those years to make me change my opinion. Of course, at that time they had not released any recordings but have since recorded six albums including this new offering (plus one e.p; all available on their website). Hand on heart I really wouldn't be able to pick a favourite from that list, all being of the highest quality and containing their own tremendous original songs.
Slotting them into a particular genre is difficult but I can remember years ago describing them as a 'hillbilly blues' band (usually trio) and whilst there are plenty of bands who fit that description, if in fact 'hillbilly blues' can be considered a genre, the Curst Sons not only bring a dose of originality to what could be one of the oldest genres since recording started, but also in most ways actually define the term. As always in the case of offshoots and blends of the 'old music' there is a question that many people pose of authenticity. The Curst Sons are based in Brighton, on the south coast of England, a long way from the Mississippi delta and the high Appalachians, but all three musicians have a deep heartfelt love of those old styles and the talent to write their own original songs that not only blend these genres but actually bring a freshness that very few modern bands, wherever they hail from, are able to achieve.
The trio consists of Willi Kerr, who takes most lead vocals with his powerfully expressive voice that is quite capable of a little tenderness but also more than happy to belt out some ferocious raw blues or hillbilly songs, accompanied by his ubiquitous 'rhythm stick' (basically; a broom handle with beer bottle tops strung from wires) or washboard. Tim Dunkerley is the great experimenter playing a variety of guitars in a variety of ways, even occasionally playing slide mandolin as well as helping out on vocals. Because there are more often than not just three of them it is important to have someone who is capable of rooting their sound and providing at least a little discipline. Such a man is Dave Simner who not only is a master guitarist but also a talented banjoist and also helps out on vocals. Willi, who has a talent for writing lyrics that are dark but sometimes tinged with strong comedic elements, writes most of those lyrics and then hands them over to Dave and Tim to add the music, something that has worked extraordinarily well throughout their eighteen years career.
The dozen songs on this album are all of their usual tremendous quality and whilst their compositions are often dark, occasionally even including a sinister almost threatening element, they always seem to manage to create an upbeat atmosphere. A hugely contrasting description I know, but perhaps it is the contrasts in their music that help to give them their unique and highly original take on several old musical styles.
Proceedings get underway with Bad Sex (& Good Whiskey) a banjo driven song that creates a dark atmosphere although there is always that feeling the Curst sons are finding a little light in a hopeless situation! There is a nice rolling guitar line on Two Cold Days In April with Willi's vocal at its powerful best on a sad ballad that is enhanced by the plaintive sound of a dobro with the suppressed 'rhythm stick' providing a nice percussive element. On Baseball Bat there is a chugging, deep electric guitar sound supported by the powerful percussion and a strong bass line on a dark bluesy hillbilly tale of murder. Willi's voice gives a perfect depiction, as if the tale is being told by an old hillbilly, with a tremendous dark guitar solo from Tim and with Dave beautifully grounding everything. The Jumping Flea includes a lovely chiming banjo line on one of the catchiest songs you will ever hear (see video below). Everything about it oozes quality and it has that perfect combination of dark and light, with fiddle jumping in and out of the song, the solid percussion and the vocal evoking the darkness and light giving the whole thing a strange haunting atmosphere.
As with their previous albums every song is a winner, taking the listener through a variety of tempos and emotions. The band may be British born and based but their feel for this music is as authentic as any band born in the U.S locations from which the styles sprung, with that natural feel having led to a pretty much unique and original sound that is now recognizably the Curst Sons.