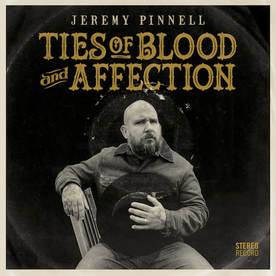 'Ties of Blood and Affection' is Jeremy Pinnell's second 'solo' album, following on from 2015s justifiably much praised debut 'OH/KY'. Prior to his solo career he worked with various bands including the excellent Light Wires who he made several albums with, also The Brothers and the Sisters and The Great Depression. In many publications, online and printed, Jeremy is spoken about as being the next 'big thing' (or at least one of them) in country music, but as is so often the case that over simplifies the man's musical proclivities. So much of the modern commercial country music has most of the edginess smoothed off and is over produced, certainly that is the way it strikes me about much of what populates the charts. Jeremy Pinnell's music is neither smoothed off nor over produced; the arrangements, if not always sparse are never over whelmed by the instrumentation and the raw edginess of his vocals is hugely evocative, something that would be lost if he didn't push his vocals almost to breaking point.
The earthy rawness of his vocals is reminiscent at times of Otis Gibbs although Jeremy probably has a greater range and perhaps a little more versatility but the character and warmth are pretty much equal and I say all that as a compliment, being a huge fan of Otis and now, Jeremy! Whilst I don't necessarily see this album as being better than his debut it is most definitely filled with more optimism or at least a large degree of positivity over what he has, rather than the self doubt and longing for something better that filled his exceptional debut. Of course another huge positive is the fact that this new album maintains the overall quality of a 'country' singer songwriter who doesn't just have a lot to offer but has actually been consistently delivering from the off.
There are just nine songs on this album that clocks in at a little over half an hour but it is certainly a half hour that is easy to repeat over and over again thanks to these mainly bright optimistic tales and Jeremy's warm, sometimes rasping, vocal style that is supplemented by some great playing by all concerned. There are some excellent stories on this album that in many ways is a truer version of 'country music' than much of the formulaic 'country pop' that populates the charts nowadays. It is probably true to say that Jeremy Pinnell has much more in common with the 1970s 'outlaw country' than any other vague generic offshoot, although in saying that, it is just as obvious that there are no stylistic contrivances in his music; he just writes and performs the songs and allows the stylistic dice to fall wherever they choose ensuring his strong individuality and lack of artifice is maintained.
There seems to be a completely natural 'rurality' in his  songs and performances, the tremendous album opener, the Ballad of 1892 being a fine example with a gentle acoustic guitar intro before Jeremy's intense vocal comes in, sounding a little like Otis Gibbs but with a greater range and much more 'countrified.' Percussion, bass and steel guitar soon add to the mix on an excellent mid tempo composition that latterly includes a powerful 'twangy' guitar on a strong story song. A nice acoustic guitar and Jeremy's powerful vocal get things going on Different kind of love, soon joined by bass and percussion, with the steel guitar coming in just right to fill out the sound of an excellent ballad that along with all of the other songs on the album tells a story that is realistic and believable; no big expansive drama', just plain and simple tales of life. On I'm alright with this there is an excellent 'twangy' electric guitar with percussion, bass and steel on a gentle mid tempo song that sums up a simple acceptance of a life that he is happy with, in part because he is also remembering what the bad times were like!
Every song tells a story, all believable and expressing ideas, sentiments and ideals that we are all subject to in varying degrees. Add to that the excellence of the performances and the warmth and expressive nature of Jeremy's vocals allied to a distinct edginess that helps cement that believability and it's difficult to imagine what more anyone could want for their listening pleasure. It certainly fulfills my musical hopes and surpasses my expectations!