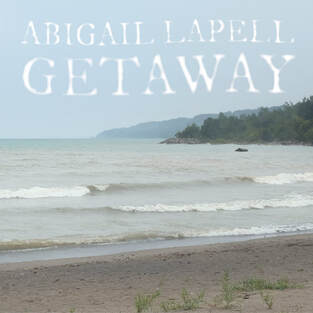 Hailing from Toronto, this is Abigail Lapel's third album and I must confess that until receiving my review copy of this beautiful, if lyrically edgy, album I had been unaware of her. Not really surprising given the number of albums that are released every week but on the strength of this tremendous recording I will certainly be rectifying that situation in the very near future!
Every song on the album has a haunting, ethereal feel, often crossing over into otherworldliness in fact; there are many occasions on this stunning recording where the beauty of the vocals and the sparse, haunting instrumentation and arrangements create not only an otherworldly atmosphere but also a slightly unsettling effect. Not anything dislikable but an edginess that knocks the listener out of the relaxed feeling that they could well have been lulled into. This is not just a singular album (or artist for that matter) that happily settles for just sounding beautiful; there are challenges afoot for the listener but the rewards are great. I generally don't like 'straight' folk albums but I absolutely love this amazing cinematic (cinemascopic if it comes to that!) recording that blends stunning beauty with great songs and a wide ranging and completely natural haunting air much of which is created by a few unusual elements in the arrangements, nothing that is overt or unnecessary, but help create the uniqueness of the recording
Abigail is the possessor of a beautifully clear, precise vocal style that has a lovely 'breathy' feel, a unique songwriting ability and is a talented multi instrumentalist. Generically her style is pretty much indeterminate although there is a powerful folk element that sometimes draws in various other influences including country. Chris Stringer, who also produced Abigails previous recording, fulfilled production duties on 'Getaway,' which was recorded at Toronto’s Union Sound studio. They were able to call on the talents of Christine Bougie on lap steel guitar, Dan Fortin on bass with Jake Oelrichs playing drums, also featuring Rebecca Hennessy on trumpet,Tom Richards on trombone as well as Lisa Bozikovic on piano and vocals, Dana Sipos on vocals, Rachael Cardiello, viola and Joe Ernewein on pedal steel. Despite that lineup of talents and instrumentation the sound always comes across as sparse, with nothing ever being over done allowing plenty of space for Abigail's beautiful expressive word pictures and voice.
The album kicks off with Gonna be leaving, the intro courtesy of piano and melodic guitar creating a jazzy feel until Abigail's gorgeous vocal comes in and the textures change, creating a powerful folksiness, a genre to which her vocals are perfectly suited. There is a gorgeous weeping steel guitar in the background of Half way to Mexico with an easy going acoustic lead supported by restrained percussion on a gorgeous song with haunting harmonies supporting Abigail's lovely lead vocal on a catchy melodic song. On UFO song the shuffling percussion and melodic guitar work beautifully with Abigail's vocals on a song that has a slightly sinister feel as befits the subject matter with the treatments in the background helping create an almost alien atmosphere. A lovely folksy 'squeezebox' supports Abigail's vocal and the ethereal harmonies on Runaway, a composition that could easily be imagined being played in an 18th century English village such is the haunting otherworldly effect. It is an incredible song that atmospherically has a slightly unsettling effect due to the beauty of the vocals and the 'strangeness' of the blend of the melody with the arrangement and instrumentation. Finally, on Shape of a mountain, the lovely melodic guitar sound underpins another haunting tale made more so by the weeping steel guitar and cello with Abigail's vocal on a funereally slow moody song but one that evokes the high lonesomeness of rural mountain life. A strong eerie mistiness wraps itself around the listener and all too soon this beautiful album finishes, albeit on an epic note.
A final summing up is difficult simply because I'm still listening to this beautiful recording, suffice to say that if you like folk with a rural country element and even occasionally a little 'jazziness' I suspect you will be very close to making this your album of the year. It's haunting, easy to listen to over and over again and beautiful. What more could any real music fan want?