WOODEN HORSE – THIS KIND OF TROUBLE 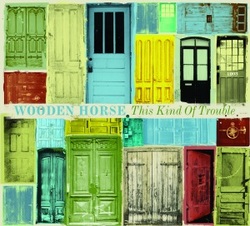 
One of the huge benefits of this digital age is that everyone who has anything to say musically can now get their songs, information and publicity out to the public via the internet, albeit often in a limited way. The downside is that the untalented are just as able in this regard as those with talent. Without the internet people like me would have to go back to relying on paper magazines to find music and to get our
thoughts on music published, something that is often a very hit and miss affair. I now receive at least ten times as many albums as I can listen to, much less review, so now that process is also hit and miss, although I do at least have some control over the situation! As a consequence I now have the chance to listen to a much broader spectrum of music than that previously available to me. A case in point was when this excellent recording dropped through the letter box. A new band on me, but one that took the trouble to send me a copy of their new album and on checking their website I thought, correctly as it turned out, that they could be interesting. What particularly appealed was that the list of eleven songs included just three covers, but those three give a pretty good indication of the bands attitude and stylistic roots, with the songs being written by Robert Johnson (Kind hearted woman), J.J. Cale (Crazy Mamma) and Vinson/Chatman (Sitting on top of the world)
This talented English duo conists of Jamie Knight on vocals, guitar and stomp and Ben Church, guitars, harp, backing vocals, National guitar and Weissenborn with Stuart McIlroy adding piano on the album as well as some gigs. All bar the three already mentioned songs are written by Knight and Church on this their second album release and cover quite a broad canvas. Lead vocalist Jamie Knight has a nice easy going warm vocal style, which when added to the highly skilled guitar playing, particularly National resonator and Weissenborn, and the laid back harmonies can’t help but grab the attention, with the piano adding variation in textures. There is plenty of stylistic diversity as the songs move between blues, folk and country without ever being directly immersed fully into any particular genre, more a variation in the bands fully formed take on these roots genres, ensuring the album comes across as signalling an excellent new and recognizable additional talent to the broad roots music genre.
The album opens with A Big Deal, a song that has a nice light resonator guitar and banjo start joined by
Jamie’s pleasant expressive vocal and a very good harmony on a tale that has a nice laid back feel in much the same way as J.J. Cale or Eric Clapton. This is followed by You Ain’t Letting Me Down a speedy piano driven blues song with some tremendous resonator guitar playing on the tale of a man who finds he’s being two timed by his woman and lays out the consequences of continuing! It may be a generations old, tried and tested blues theme but it’s still a very good song further enhanced by the instrumental blend. All Along is a very good, shuffling, upbeat harmony duet with a nice ‘Hawaiian’ guitar sound on a tale that in many ways evokes the old cowboy ballad sub genre. There is a fairly extraordinary vocal performance on the title track This Kind Of Trouble, a harmony duet that has a powerful gospel feel and includes yet more excellent guitar sounds. It’s almost unbelievable to think that these
two men are not a pair of African American gospel singers, thanks to the tremendous feeling in their evocative performance. The Walking Rain has a  lovely haunting guitar intro followed by a heartfelt vocal on a beautiful sparse country song that adds to the diversity of this excellent recording. The three covers? Thanks to the ‘classic’ status of each of the originals, nothing can really compare but Wooden Horse are certainly not shaded by most other versions I’ve heard.
If you have a liking for Eric Clapton’s solo albums or most of J.J. Cales output it is very likely you will enjoy this excellent album. It might not be ground breaking, but it is a very good album of excellent songs and performances by a band that have the talent and feel that should allow their music to succeed.