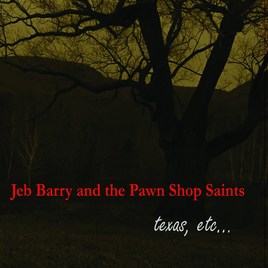 So many double albums contain a few good songs and lots of filler and when they contain twenty songs there is usually little or no hope that all will be essential. That was my feeling until I listened to this tremendous new collection from Jeb and his band. He could have released ten songs now and the other ten on his next album in a year's time and would still have got rave reviews for both thanks to the quality of these tales.
The reason for twenty songs on two discs was that the first disc was a 'band' recording although if not exactly stripped down, the arrangements are certainly sparse, whilst disc two is mainly, but not exclusively, just Jeb and acoustic guitar. He is occasionally helped out on vocals by Heather Austin and a melodic electric guitar and occasional harmonica and mandolin which certainly add colour, not that extra colour is particularly necessary on these excellent songs, but none the less it is still welcome and never overdone. Some may say that the difference in recording techniques means the songs are not interchangeable but because the band only add what is essential to disc one that is not the case here.
Jeb sometimes works solo (give 2016s excellent 'Milltown' a listen as an example) as well as with a group and has had some songwriting success in Nashville. Talking of a group; the lineup on this album was Jeb, who wrote all of the songs, supplied lead vocals, guitars, banjo, harmonica, mandolin, percussion, bass and resonator guitar, Michael O’Neill played guitars, backing vocals and mandolin with Chris Sampson on bass and Josh Pisano, drums. I've seen Jebs style compared to artists of the calibre of Steve Earle and Jason Isbell, comparisons that even just a few minutes into this album are easy to understand thanks to the lyrical descriptions and poeticism in every song. His vocals are raw, evocative and able to slide in with the melodies of his highly skilled songwriting that is a match for most that I can think of.
His first two solo albums were well received but 'Texas, etc' is to my knowledge his first 'band album,' although rather than 'rocking out' on these songs, the arrangements are designed to just get the best out of the lyrical tales to the exclusion of any histrionics, something that is achieved with interest!
To mention a few of the songs we'll start with If this heart had walls, a tale that kicks off with a twangy guitar intro with acoustic guitar, percussion and throbbing bass, on a mid tempo country song that has a gently rocking feel whilst including some excellent harmonies and a nice guitar break that adds further colour and depth. On Chainsmoker, an acoustic guitar and harmony vocals join Jeb's raw evocative vocal along with some nicely restrained percussion. Latterly there is an intervention in the form of an electric guitar break that adds yet more colour to the song and takes it out of a 'simple' acoustic tale, giving it more 'legs!' The dobro, harmonica, bass and metronomic percussion drive Gravel roads and whiskey bars, a fairly slow bluesy song but one that is a beautifully written and performed story with Jeb's raw vocal perfectly suiting not just the arrangement but also the story. Seemed like a good idea at the time starts with just acoustic guitar before Jeb comes in with his strong, evocative vocal, with Heather Austin joining in on the chorus. She goes on to take one of the verses with the pair dueting on another and as with most of the twenty songs on the album, despite the sparse arrangements; there is still plenty of colour and texture.
This is an unusual album, not just in terms of it being a double, but in the fact that the band play with such admirable restraint, in some ways emphasizing the tightness of the collective and their desire to allow the power and quality of the songwriting to shine through. Bearing in mind Jeb's previous recordings he certainly doesn't believe in dense, over produced arrangements, always allowing the lyrics to be front stage but with high quality playing from the band whenever they are needed. This is a tremendous album that never rocks but always holds the listener's attention, something that very few others I can think of are able to do.