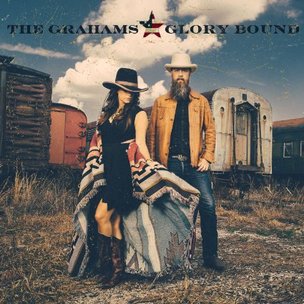 This is roots duo, The Grahams, second album and if the first is even remotely approaching the quality of this recording it will be well worth a listen. The duo are Alyssa and Doug Graham, a couple who first met as children, became a couple in their teens and then married, information that goes a long way to explaining how they are musically a match made in heavan!
The couple wrote all of the songs on this recording, often with the help of childhood friend Bryan McCann, who they grew up with in New York. Many of the songs are rooted in travel, particularly trains, something they were inspired to do because of their love for the itinerants of the past such as Woody Guthrie, a particular hero of theirs. Doug's mastery of the resonator guitar is matched by Alyssa's spectacularly dexterous vocal chords ensuring their blend is beautifully matched to the breadth and scope of their music, which ranges from the outer extremities to the middle ground of 'roots music,' and is quite mind boggling at times.
There is little in music this extravagantly talented duo cannot tackle and almost certainly make a success of. They are talented in everything they do from Doug's multi instrumental abilities, their stylistic versatility, songwriting excellence and the vocal acrobatics of Alyssa, all allied to their desire to push themselves beyond any normal boundaries. In fact their talents are so great they can almost be looked at as a double edged sword. On the one hand they can do everything, on the other, promotion must be a nightmare. I'm not going to raise the old argument of the pigeon holing of artists in stylistic genres but it is a fact that artists who lack huge budgets have a greater chance of success if they can be promoted as country, blues, rock, folk or any of myriad other styles rather than just about the whole lot. This duo definitely falls into the latter!
As to the songs themselves; there was a little old timeyness, country, gospel, even a little blues and blues rock that all allowed Alyssa to express her vocal versatility rather than just going for power, of which there is plenty. When restraint was shown in the instrumentation and speed the album took on more power and it seemed to me a much greater quality, although that is just a personal feeling, and many will think the opposite.  With this couple the quality is always there but that restraint on the vocals allows more stylistic nuance and rather than being lost amongst the mid to upper echelons of their loose genre they then take on a much stronger individuality.
Things get under way with a quiet acoustic guitar intro on the title track, Glory Bound,  before Alyssa's powerful feminine vocal kicks in, soon joined by Doug's harmonies as the song takes off into a rootsy rock sound that has a little country edge. The drumming is excellent and there is a terrific twangy electric guitar solo on this exceptional, if sometimes a little busy, song that often has an anthemic quality. Next we have an excellent chugging boogie sound that has a Little Feat edge, that is until the power of Alyssa's vocal performance hits the listener with its drive and intensity, backed up by Doug's harmonies and a mélange of instrumental sounds. Lay Me Down is a beautiful love song that has a country feel but without ever descending into any saccharine sweetness thanks in part to the arrangement but also to the power and drive of Alyssa's vocal. The drums lay as solid a foundation as anyone could wish for and there is a nice melodic keyboard and guitar sound as well. The Wild One is another song with a nice rootsy countryish edge and a lovely sassy vocal from Alyssa on a strong emotional tale that tugs at the heartstrings. It is a song from a similar (but not the same) mould as the teen 'death songs' of the early 1960s and includes a tremendous arrangement with the keyboard break serving to heighten the emotional content. Next up is Griggstown an excellent twangy country song that never fully immerses itself in the country medium, instead, as with most songs on this tremendous album, the song defines its own style that mixes a roots rock leaning with country. It is never quite country rock or roots rock but has a quite natural individuality that says this duo are going to play the music they feel, irrespective of anyone trying to fit them into a stylistic box. A terrific song and a great vocal performance by Alyssa on a composition that has a just about perfect for purpose arrangement and a speedy, hard driving and emotion charged atmosphere. Finally, The Spinner is a beautiful easy rolling country story song with lovely steel guitar and dobro, with another lovely restrained vocal and excellent harmonies on an appealingly melodic tale.
Despite their tremendous talents there is nothing starry about this couple who simply want to express themselves in terms of their own music without even considering a single stylistic direction. Formulaic country music is something their talents, if not their pride, would allow them to do, but instead they choose to go their own unique way, something deserving of huge applause. I wouldn't be a bit surprised if their reward is the huge success that such an original couple deserves.