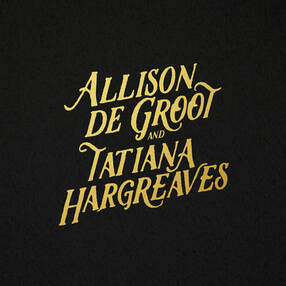 A review of an instrumental album that has been written by me is a real rarity and whilst this tremendous recording is not all instrumentals, of the thirteen tracks only four include vocals. That to me is a shame because both of these hugely talented young women have beautiful evocative voices perfectly suited to this 'old time' rural music and their harmonies are simply beautiful
The two women in question are Tatiana Hargreaves on fiddle and vocals, plus banjo on two tracks, with Allison de Groot on banjo and vocals. Allison also teaches banjo and is a member of both Molsky's Mountain Drifters and The Goodbye Girls, both bands recordings being highly recommended by me! Tatiana also teaches, in her case the fiddle, and is much in demand for touring with artists such as Dave Rawlings, Gillian Welch, Laurie Lewis, Darol Anger, and Bruce Molsky. She also has a now ten year old, but excellent, solo album out (Started out to ramble) and duo recordings with both Jake Blount and bassist Ethan Jodziewicz as well as recording with the Ephemeral Stringband.
This duo's versatility is quite staggering and despite just those four vocal tracks out of the thirteen there is never any sense of boredom thanks to the often astonishing playing and the quality of the arrangements. The instrumentals, whilst played almost exclusively by fiddle and banjo are so wildly diverse in tempo and experimentation with sounds and performance, that it is an easy album to play over and over again, something that, in my house at least, is rare for a mainly instrumental album
Of the compositions some are traditional and some by artists as diverse as African American duo Nathan Frazier and Frank Patterson, centenarian Arkansas fiddler Violet Hensley and bluegrass pioneer Alice Gerrard, plus there is one by Judy Hyman and another by William Bollick of the Blue Sky Boys. Instead of going for the better known tunes, most of these are quite obscure and the album is the better for that, allowing the listener to be in on that air of mystery that most will sense with old songs heard for the first time and knowing they are being kept alive by artists of great quality.
Eighth of January, an old fiddle and banjo instrumental, opens this tremendous album, immediately followed by I don't want to get married, again with the fiddle and banjo but this time it's a vocal track with a gorgeous, evocative lead vocal from Tatiana and beautiful harmonies from Allison on a hugely atmospheric upbeat up tempo song, with most of that eerie atmosphere courtesy of the vocals. Cuckoo's nest is another great instrumental performance on which the two instruments take dual leads, again creating an old time atmosphere, as if these two talented women are sitting on a front porch having fun, the latter almost certainly factual! Willie Moore is another vocal track and the song opens with the beautiful sound of Tatiana's voice supported by the atmospheric banjo on an old song that has never sounded better, again creating a rural front porch atmosphere reincarnated  from a time before even I was born! Final mention is of Who wouldn't be lonely a beautiful duet by the two women, with excellent support from the banjo on a gorgeous old William Bollick composition that was first recorded by him and his brother in the 'Blue Sky Boys,' and  has never been performed better than on this recording, creating the atmosphere of an old 'parlor' song.
I love albums that evoke the far off days of the originators of recorded country music; the very best are able to create an atmosphere of deep eeriness and 'Allison de Groot & Tatiana Hargreaves' really is one of the best.