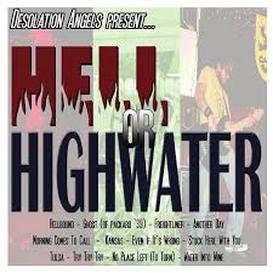 
There is quite a lot of originality in this album, something that is not always that common in the various off shoots of ‘roots’ music but it is  certainly most welcome when it does occur. Not that there is anything particularly wrong in a lack of originality, after all there are not that many notes to play around with. It’s just that this tremendous band that hails from Detroit, a city that has always had it’s own pretty much unique sound, brings a slightly different slant to several of the sub genres. It’s that sound that helps to bring the originality to an album that is part southern roots rock, part country and always blends the two perfectly but never without that unique hard edged Detroit sound.
The core band is really just a trio but one with an immense hard driving power and consists of Dan McKernan on vocals, electric and acoustic guitars, banjo, mandolin, harmonica, Erik Pelto, drums, acoustic guitar and backup vocals and John Abel on bass guitar, with several other musicians supplementing their sound. There is also the gorgeous vocals of Emily Rose on Freightliner a beautiful duet with McKernan, who wrote all of the songs.
Mckernan is probably most at home on the raw, fiery roots rockers but can also handle the tender ballads, with that driving Detroit hardness always bubbling just below the surface, giving this terrific album a life that many playing in a similar style can only dream of. Often the feeling is that McKernan is struggling to show some restraint with his vocals and deserves huge credit for managing to do so where necessary! There is a fire in his vocals even on the slow moody songs that he obviously can’t and shouldn’t try to restrain because it’s his vocal style that makes the biggest contribution to the bands signature sound. Having said that, there is a huge degree of expert musicianship from all concerned with Pelto and Abel laying a powerful foundation for everything that follows to build upon.
Even on the ballads, nothing is soft and wistful, there is always a powerful muscular sound, as we have come to expect over the decades from Detroit based bands but this one adds a strong country, or at least country rock, flavor to the mix that blends everything perfectly. This is their second album, the first being 2006’s‘High In Third Gear’ and if as others have suggested that was as good as this one I’m amazed they are not already better known.
The album opens with Hellbound a fiery hard driving song that has the feel of a southern roots rocker, but
also includes considerable melodicism and McKernan’s raw vocals propelling the song at a breakneck pace. Next comes Ghost (of Packard ’39) a tale that kicks off with surf guitar and drums followed by the raw vocals on a dark powerful roots rocker that is full of fire and drive. The listener can be forgiven, following these two songs, for thinking this is simply going to be an album of top notch hard driving roots rock but the very next song is a huge contrast. It is the gorgeous duet, Freightliner, a slow moody, if powerful, ballad on which we have the stunning vocals of Emily Rose contrasting with McKernan who actually manages to soften his tone and show a little restraint! Apparently Rachel Brooke, a good friend of the band, was originally going to perform on this song but Rachel found it difficult to be in two places at once so Emily stepped in to help out. Whilst I am a huge fan of the always wonderful Rachel I doubt that even she could have improved this tremendous song on which Emily’s vocal is not only beautiful but also full of power and commitment. Another day is a really good mid tempo country rock tale, again with a little restraint shown on vocals. It has a nice chiming guitar sound on a song that whilst softer
than the first two certainly has a feeling of tension to it on a tale of someone trying to cling to a love that is on it’s last legs. A sad pleading song full of pathos and desperation. Kansas is an up tempo countryish rootsy rocker with nice twangy guitar on a song about a man hell bent on murder, a powerful song that slowly builds in tension,
whilst Tulsa is another really good slow country ballad with lovely steel guitar and a little twang on a reflective
tale of a man travelling aimlessly. Most of the songs on this excellent album contain stories that can be related to, often having an element of reflection and all of a uniformly high quality.
I get the feeling with each listening session that there is still more in this already excellent album to be revealed, such is the overall quality. Not so much a slow burner as a fire that bursts into flames from the off and burns brighter with each listen!