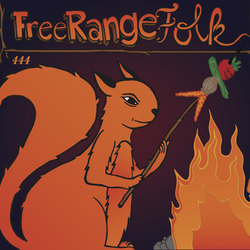 
This is a tremendous album of country, folk, hillbilly, alt. country and classic country rock all blended into a delicious stew that has an excellent spicy edginess to it. Everything this band plays is believable and full of conviction, whether on speeded up electrified alt. country rock or mellow ballads with even the latter having a little bite to them. At times they are even a little reminiscent of country rock pioneers such as the New Riders of the Purple Sage with a little ramshackleness that is so essential to this brew but only possible in a band of the highest quality as this seven piece so  obviously are. Whilst that quality is there for all to hear, they fairly obviously put the pleasure of playing and performing together above any desire to polish their music to what would for them be an unnatural sheen.
The lineup is very much a family band with husband and wife Amber Breiner Finsel and Josh Finsel, another husband and wife, Kevin and Sara Ruch, Kevins brother Dan and as far as i’m aware Brad Konstas and
Shawn McCarty who do not have family links but are friends. The instrumentation is also worth mentioning with Amber on upright bass, electric bass, guitar and harmony vocals, Josh on banjo, guitar, harmonica, lead and harmony vocals, Kevin plays guitar, lead and harmony vocals and dobro, Sara on washboard, musical saw,
boom bah, harmonica and harmony vocals, Brad, percussion and harmony vocals, Dan on trumpet and harmony vocals and finally Shawn McCarty on mandolin, electric guitar, lead and harmony vocals. All of the songs, with the exception of their excellent version of the  Waterboys Fisherman’s Blues, are written by Kevin Ruch and Josh Finsel and whilst most themes are fairly common, lyrically they are neither much better nor worse than many others
in the upper echelons of roots music, although very few assemble their songs quite as well as this tremendous band and I’m sure they must have all had some input into the arrangements that ensure most of the songs stay in the memory. It should be pointed out that the instrumentation is never over the top but is well chosen to match each song, so don’t run away with the idea that all of the named instruments are piled  on top of each other. The atmosphere is always light and never overbearing.
Whilst they might work in various of the above mentioned sub genres on individual songs, each one is so masterfully played and sung that everything is blended with consummate skill, enabling the album to naturally segue from one song to the next without any thematic or generic discordancy thanks to the abilities within the band. Most songs have a male and female duet lead ensuring we are never without harmonies and those harmonies are
not the pure blend so beloved of the mainstream but have a slight discordancy that adds to the ebullience of the album. Lehigh is a really good hard driving song with raw vocals and gorgeous harmonies mixed with excellent banjo and dobro on a song that strongly evokes the rurality of a hillbilly life. Alfalfa Seed is a beautiful country ballad with a nice edginess in the vocals and gorgeous harmonies, driven by banjo plus mandolin and guitars on a tale of reflections on a happy life that strongly evokes the sentiment of the song. It will be no surprise that Shit Show does not echo mellow rurality, but it is an excellent alt. country rocker and as such is a nice departure from the preceeding, exhibiting their abilities as they stretch into a more recent generic addition, albeit still with a little of that 1970s feel.  Squirrel II is a speedily cheerful song about being poor but happy, with excellent hillbilly vocals and tremendous harmonies, with acoustic instrumentation on a song that strongly evokes the lighter side of NRPS and is followed by Lenhartsville Waltz. This has a tremendous mandolin and acoustic guitar intro on another
song that has a high lonesome feel, with edgy male lead vocal on a light hearted tale of a barn dance, with lovely mandolin and banjo solos and the usual terrific harmonies. Whilst there are evocations of 1970s  country rock
this album is very far from being locked into a particular time frame. Much about it is modern but this band are not afraid to time jump back to the 1950s and beyond, in fact they seem positively ecstatic in doing so!
The more I listen to this album the more I get the feeling of a link between this music and early country rock bands, not only the NRPS but also the Goose Creek Symphony, a band that pushed the boundaries of country and rock, inhabiting a similar area to Free Range Folk, but don’t get the idea that there is anything copyist about them. It’s not just a question of musical similarities, that to other ears may not even exist, but also in the sheer joyous exuberance and ‘old timey’ attitude they bring to this roots music. Do yourself a favour and give this excellent album a listen; I’m sure you will have as good a time listening as this tremendous band obviously did whilst recording it.