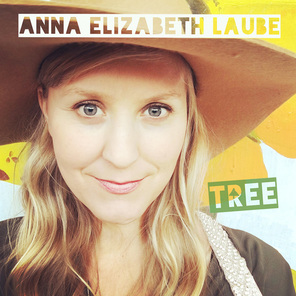 Anna Elizabeth Laube is the possessor of a beautiful feminine vocal style that has a lovely vulnerable 'edginess,' letting the listener know that this is no ordinary talent but someone who has much to say whether on her own songs or the work of others.
Musically, 'Tree' is a gentle reflective album, despite some of the lyrics being pretty hard hitting, even including at times an appealing idealism, but because so much care has gone into the arrangements the listener is left with the thought that they have witnessed a gentility that at the same time has more than just a tinge of edginess. In other hands this could well have come out as mellow and unmemorable but thanks to Anna's writing, vocal and arrangement skills everything about this recording simply oozes quality of the highest degree.
Anna's writing is unusual, basically a gentle style but one that few if any other singer songwriters can match, much the same as her melodies and vocals really, but there is also an edginess that lets you know there is a steely determination at work here, with the songs subjects knowing how the real world and many of its foibles work despite the gentle sounds. She is able to get a perfect balance in her songs, stopping well short of over produced mainstream music but creating an album that will certainly appeal to the 'mainstream' given the chance! I know i'm always going on about the 'dreaded mainstream' but if the 'over' producers of that much maligned (by me at least) 'musical institution' would allow an artist's vision to drive them instead of being so propelled by profit they could probably make just as much money and the masses would be 'subjected' to much more thought provoking music; this album for example. Maybe that is an over simplification but there should be room for artists who refuse to toe the corporate line, instead choosing to stick to their own creative musical vision.
Seven of the nine songs were written by Anna, the exceptions being album opener Wallflower, a quite stunning version of the Bob Dylan composition and a lovely version of Beyonce's XO, the combination showing that Anna is no respecter of 'musical boundaries' and has the talent to imbue anything she sings with her own personality and unique folksy roots style. Most of the recording was self produced, something that worked particularly well on this generally quite sparse album with Anna having a writers intimate knowledge of the instrumentation needed to bring her songs to life and give them colour but without drowning them. The musicians used, all played expertly and with no histrionics, although a fair amount of the instrumentation, bass, electric and acoustic guitars as well as all lead vocals were often handled by Anna, herself a talented multi instrumentalist.
The title track Tree begins with a melodic acoustic guitar intro soon followed by Anna's lovely vocal on reflections on the life of a tree that provided comfort and adventure from childhood to adulthood before being cut down. The gorgeous haunting harmonies add to the incredible beauty of a sparse, beautifully conceived song that eventually includes the dynamic sound of an electric guitar adding a slightly unsettling note to the mellow beauty. Similar to life really! A harmonica, melodic guitar, bass and Anna's haunting vocal propel I miss you so much, a slow moodily edgy song that has a similar, slightly spooky feel to the music of artists such as Rachel Brookes. It is the tale of the feeling of devastation immediately after the end of a love affair. Please let it rain in California tonight is a beautiful mellow song led by piano and Anna's evocative vocal, containing some idealistic observations that probably keep us all going and if taken up would make this world a better place. Sadly that won't happen. Final song on the album is All my runnin' a composition that is led by a gorgeous steel guitar on another musically gentle but highly descriptive song of fate leading towards a potential love. The lyrics are astute and questioning and as with just about every song on this recording the melody is both gentle and memorable.
This is another of those recordings that could be termed 'a missing link,' in as much as the quality and gentle melodicism could appeal to the mainstream market whilst still retaining appeal for those who like their music to have an 'edge'  that is rarely found in the world of commercial orientation. This talented lady deserves no less.