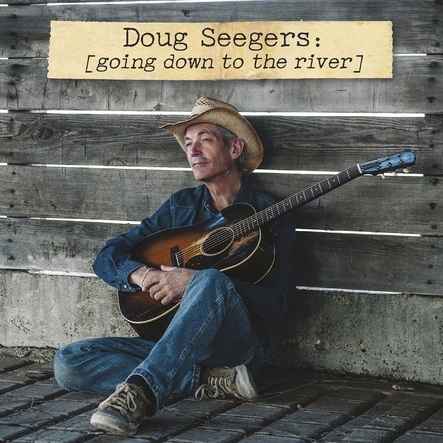 Doug Seegers – Going down to the river (Lionheart Music Group)
Readers must get fed up with me saying it but this is another contender for ‘Album of the year. Going down the river is exactly what ‘modern day real country music’ is all about. Nothing is ever perfect but as far as my musical taste goes, this is one of the very few albums to achieve that status. I love everything about it, from the songs, several of which are perfectly selected covers, his vocals are excellent and expressive with just the right amount of rawness and twang. Stylistically it covers the various aspects of country music with enough lyrical and tempo changes to suit anyone, tremendous arrangements and playing; in other words, perfect!
http://www.dougseegersmusic.com/
Full review to follow.

The Broken Prayers – Crow (2008) (Self Released)
This is a terrific album of melodic, dark Gothic country that really should have been a hit when it was released six years ago. Of the ten songs eight were written by band singer Peter Marshall, one by Voni Morrison and an incredible version of Buck Owens Act Naturally. It can still be purchased on the www so enhance your music collection by buying one!
http://www.reverbnation.com/thebrokenprayers

Pine Hill Haints – The magik sounds of the Pine Hill Haints (K Records)
This is a tremendous album by one of the most consistent roots bands around. They have been variously described as honky tonk, country, alt. country, folk, hillbilly, even old timey and they are all of those things but with a very strong ‘punk’ attitude that ensures their sound is pretty much unique in this day and age.
http://thepinehillhaints.com/

Shakey Graves – And the war came (Dualtone music group)
Avant country is a never used term but one that in many ways could sum up this extraordinary recording! Shakey has an unusual but character laden voice, something that can also be applied to his songwriting and arrangements. To say he stretches the roots boundaries is an understatement but he never caricatures the country(ish) roots of his music. This is definitely an album that many won’t ‘get’ to start with but as I’ve said about other albums, it more than repays repeated listening sessions. There is great musical beauty and a little of the beast!
http://www.shakeygraves.com/

Front Country – Sake of the sound (Self Released)
This is an incredible album that possibly takes bluegrass as it’s starting point but thanks to the virtuosity on tap within this band of huge talents, leaves most other bands in their wake. At times the skills are such that it almost takes on an improvisational or free form feeling. They are a six piece band who got together by chance. I suspect they will be forced to stay together now thanks to the way everything gels and flows!
http://www.frontcountryband.com/

Billy Strings and Don Julin – Fiddle Tune X (Self Released)
Two virtuosic players of guitar and mandolin plus banjo, allied to Billy’s raw evocative ‘old timey’ vocals and this album is a must for anyone who claims to like real country music, albeit with absolutely no unnecessary Nashville adornments, which is exactly what real country music is! Great album!
http://billystrings.com/

Daniel Meade – Keep Right Away (From the top records)
A hugely talented man whose music covers so many off shoots of country music including country rock, hard country, honky tonk, even including a little bluesiness and much more besides. When you see the list of support cast on this superb album, his second, it is easy to see how highly rated he is. They include various members of the Old Crow Medicine Show, Diana Jones, Chance McCoy, Chris Scruggs and a few more! His songs are excellent, his vocals expressive, the tempos and lyrical content varied, making this a tremendous album!
http://www.reverbnation.com/danielmeade
Full review to follow

Oh Susanna – Namedropper (Sonic Unyon Records)
Since hearing Suzie Ungerleider’s (or Oh Susanna) first album ‘Johnstown,’ fifteen years ago I’ve loved her beautiful feminine vocals that sometimes have an edge of vulnerability, at others a gritty strength. The fact that she is a talented songwriter only serves to strengthen each album, giving her back catalogue a virtually incomparable quality. This is her ‘covers album’ with each song having a different Candian author, songs by people such as Ron Sexsmith, Old man Luedecke and Jim Bryson. The selection of compositional material shows great taste and Suzie’s vocals are at their feminine best, the arrangements perfect, overall proving beyond all doubt that Oh Susanna is one of the greatest of modern day talents, as good at interpreting others work as she is her own songs.
http://www.ohsusannamusic.com/

Good Luck Mountain too (At The Helm)
Incredible album of rural reflections rooted in love but not of the twee ‘boy meets girl’ nature. Unusual arrangements and a moody, flowing atmosphere but a dramatic tension is never far away, perhaps exacerbated by the mellow music. There is very little doubt that this will be a dead cert for many albums of the year lists! Great album.
http://goodluckmountain.com/
Full review to follow

Elijah Ocean – Bring it all in (New Wheel Music)
On the strength of the first listen to this brilliant album I immediately purchased his first two albums as well. It is difficult to describe in just a few words but his ability to write evocative lyrics and memorable melodies is at the top of the tree. The arrangements are excellent and his vocals are warm and atmospheric as are the gorgeous harmonies on these eight songs that range from folksy country to country rock, but all played and sung in his own unique style. As I said at the start, brilliant album!
http://elijahocean.com/
Full review may follow

American Thread – Songs in the war (Self Released)
This is one of the best ‘alt. Country’ albums of the year so far! Tremendous songs, raw, melodic vocals, excellent playing and all carried out with a ‘punk’ edge, although not so much that it descends into punk. I’m always going on about music with an ‘edge’ and this most definitely has an abundance of that, but of a very high quality. Even the ballads have a natural raw edge and when they rock they are better than most rock bands! Tremendous album.
http://americanthreadband.com/
Full review to follow

Whiskey Shivers (Clean Bill Records)
Labelled as a ‘Bluegrass’ band the Whiskey Shivers brand of American music predates that label and is probably more accurately described as ‘hillbilly’ or at least ‘good time folk music.’ From a similar mould to Old Crow Medicine Show this tremendous five piece acoustic band have everthing they need to succeed. Their songs are excellent, they play with fire and skill, tremendous lead vocals and harmonies, great arrangements and even a jug that takes care of any bass requirements whilst washboard covers percussion! Great band and album!
http://whiskeyshivers.com/
Full review may follow

JP Harris & the Tough Choices – Home is where the hurt is (Cow Island Music)
Forget the bland manufactured mainstream country pap, sorry, country POP. If you think that is the real thing listen to this tremendous album and you will find it comes from the same tap root. Thematically there are similarities, even the construction of the songs may be similar but the difference is that this is plain, unadorned pure ‘country music’ that is worthy of the name. Proof that you don’t need to wear a Stetson (or be clean shaven!) to be a country singer!
http://ilovehonkytonk.com/

Dick Lemasters – One bird, two stones (Longneck Road Music)
Excellent Texas country rock with a dash of blues on an album that often really does rock. The playing is always highly skilled, the vocals are evocative and at times the guitar work is virtuosic, with the songs varying from slow atmospheric blues or country ballads to some incredibly fiery rock, all underpinned by that signature lead guitar sound. Most songs have a dark atmosphere giving the album an added power, but there is also a decent helping of subtlety.
http://www.dicklemastersmusic.com/

Jeff Bell – Turned Every Screw (ROTS Records)
This is an extraordinary album. Jeff Bells vocals are somewhere between Tom Waits and Chuck E. Weiss territory, there is a dark atmosphere, incredible arrangements, great songs and a tremendous intensity to this generically indefinable album, although ‘Roots’ will do fine! The instrumentation is at times quirky on this always riveting collection of tales. I suspect that anyone hearing any of this album will immediately go out and buy it and it’s predecessor. A highly original and talented artist.
http://jeffbellmusic.com/
Full review to follow

Denver – Rowdy Love (Mama Bird Recording Co.)
A trio of talented singer/songwriters, all entirely different vocally, but they blend their voices into an entirely believable and edgy alt. country stew. They are supplemented by a number of other talented musicians on this album of great songs, some of them quite cinematic in scope. This album is so good that the more you play it the better it gets and it was excellent to start with!
http://denvertheband.com/
Full review to follow

The Ballroom Band – Skebobruk Sessions (Self Released)
This terrific album quite literally defines modern day ‘country rock’ in as much as the mix genuinely is a virtual 50/50 split between those two genres, all put together by a talented five piece Swedish band! The songs are beautifully written with a variety of  themes and  tempos from speedy country rockers to slow moody ballads. The lead vocals are very good and the soaring harmonies as good as you could possibly wish for, there are catchy hooks and memorable melodies whilst the playing is near peerless, with a nice blend of rocking guitars, banjo and weeping steel guitar on this their fourth album. It’s difficult to explain in just a few words exactly how good this album is so buy it and let your ears prove me right!
http://www.theballroomband.com/