ORPHAN BRIGADE - HEART OF THE CAVE 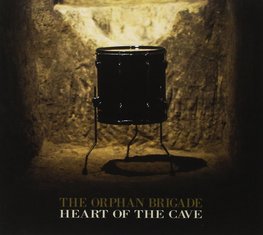 This mind bogglingly talented loose collective that is Orphan Brigade released a documentary allied to one of, if not the most, haunting albums I have ever heard back in 2015. That was 'Soundtrack to a ghost story,' a recording that was so atmospheric any listener with a pulse will have felt the recording as much as heard it, with it's tragic, harrowing theme immersed in a plantation house that is now a museum riven with its civil war ghosts. I may be a little naive but I still fail to see how that emotional roller coaster of an album was not a huge worldwide hit. The question was always going to be 'How do they follow that?' With a few minor reservations it pleases me no end to say they have done it again with this highly unusual album, 'Heart of the cave.' This time the location has moved from post civil war Kentucky to the caves of Osimo in Italy.
All are artists who have their own, mostly solo, musical careers away from the band so in many ways this can be said to be a 'super group,' a term that is perfectly suited to these super talented musicians who include Ben Glover, Neilson Hubbard, Josh Britt, Gretchen Peters, Barry Walsh, Kris Donegan, Heather Donegan, Dan Mitchell, Dean Marold, Will Kimbrough, Natalie Schlabs, Eamon McLoughlin, Audrey Spillman and Kira Small. A deep breath needs to be taken before voicing this bands lineup but it strikes me as being a project in which ego's are left out of the equation and the most important aspect is the project itself.
The album was actually written and recorded in the caves beneath the Italian city of Osimo but the artists still had to try to create the atmosphere they felt so that we listeners could share it. To say they achieved that aim is an understatement, virtually enabling the listener to feel the atmosphere in a similar way to their debut. The location and the story may have changed entirely but the beauty of the music, the quality of performances and the gripping, often haunting flow of songs certainly haven't.
Having said that, after numerous listening sessions I don't quite hear the emotional depth or as much of a haunting atmosphere that I felt their previous album 'Soundtrack to a ghost story' contained, although that statement can be applied to most albums; such was the subject matter and the incredible quality of that debut. No doubt a large part of the reason was the fact that the debut was centered on one plantation house and a bloody episode in American history that many are familiar with that had its own harrowingly evocative power without the need for dramatization, something Orphan Brigade tackled with perfect taste, sympathy and balance. Those comments really shouldn't be taken as criticism or out of context or as a lessening of the quality of this recording. 'Heart of the cave' is an excellent, powerful album that has its own evocative atmosphere that is set in an entirely different geographical location albeit a town in Italy. Unfortunately it is a town of which I have no knowledge of its history or events, and yet in spite of that Orphan Brigade still create what I'm sure is a strong atmosphere that is evocative of that particular place. Even to my ears there was a powerful sound and a depth that did evoke a rural Italy (I do know Italy, just not that part!) wrapped in a haunting almost echoing sound that all who have visited large caves will be familiar with.
As with their debut, there are a variety of textures and arrangements that ensure it will be a long time before anyone finds anything becoming predictable on this recording that includes songs that are often on the edge of otherworldliness. Album opener Pile of bones kicks off with a foundation of percussion before the full band harmonies come in on a tremendously catchy song that often has a powerful and haunting gospel feel, as do many of the harmonies on the album and we should give thanks for the fact that there are so many talented vocalists in the lineup. The fiddle brings a strong folksy feel and is eventually joined by acoustic guitar but it's those harmonies that carry this excellent song. Flying Joe is a song that has an almost South African chant with a sparse instrumentation but a strong catchy melody and choral vocals with interventions from brass and mandolin backed up by a constantly percussive acoustic guitar. An evocative male lead vocal leads The birds are silent, a song that has an eerie sounding arrangement with excellent percussion and a quite spooky guitar sound, then the song changes tempo and texture with a fuller instrumentation before falling back to its more reflective tone. On Sweet Cecilia a very gentle acoustic guitar and mandolin start things off before being joined by an excellent male lead vocal with gorgeous female harmonies and occasional slide guitar on a beautiful ballad that has a quite stunning atmosphere.
Whilst to my ears it doesn't achieve the greatness of 'ghost story,' 'Heart of the cave' is a tremendous album in its own right, with excellent songs and performances from all involved and perhaps more importantly containing its own powerful, unique atmosphere that enables anyone who hears both albums to know the same talented collection of musicians are responsible for both. Can't wait for the third!