SCOTT COOK - FURTHER DOWN THE LINE 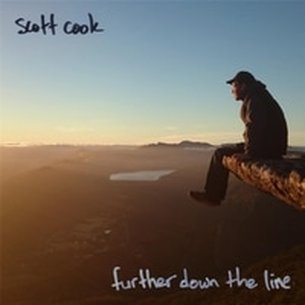 'Further down the line' is the fifth excellent release from the much travelled Canadian singer songwriter Scott Cook. I reviewed his 2013 collection 'One more time around' via a downloaded mp3, whereas I received my review 'hard' copy of this album in the post. I mention that because often there is very little information with downloads, but contrarily this album is contained within a 120 page booklet that is packed with goodies such as lyrics to all of the songs, some of Scotts entertaining and philosophical musings and a whole collection of fascinating and beautiful photos, which collectively make the album worthy of purchase even if you don't like the music, something that is very, very unlikely!
There are ten songs on the album of which seven were written solely by Scott, one by Heather Styka, and two that Scott co-wrote with Benjamin James Caldwell and Walk that lonesome valley, a traditional song that he kept the chorus to but wrote new verses about three 'undersung American heroes.' His vocals have depth, warmth and are incredibly expressive on this recording on which the generally sparse arrangements and playing are excellent, although to me this is a lyrics driven album that literally demands you listen to  the perceptive stories. Having said that, the melodies are strong and memorable, so a nice little conundrum! Scott's guitar playing is exceptional and beautifully compliments his vocals and as an example of how highly rated he is the musicians who help him out on this excellent album are of the calibre of Melody Walker and Jenny Ritter, a couple of artists who I've often raved about!
The album gets underway with Further down the line an excellent song that has a nice banjo and guitar sound with a gentle bass underpinning the song and Scotts evocative vocal ensuring this is a great start to another tremendous collection of Scott Cook songs. Alberta, you're breaking my heart is another tremendous song, this one starting very slowly with just acoustic guitar and Scotts voice before the violin and banjo gradually blend in, never taking over but adding colour to a sad mournful tale of lost love, but one that is beautifully conceived, arranged and performed. The harmonies on the chorus seem to deepen the mournful sense of loss on another beautifully conceived and performed story song. Scott's rendition of Walk that lonesome valley is an absolutely gorgeous version of the traditional spiritual and one that includes the original melody and chorus but with new verses. It is driven by a lovely tuneful guitar, with banjo and gorgeous harmonies adding to the quality on the chorus. Fellas, get out the way is an upbeat up tempo song with a strong sense of humour about men's attitude to women and the realization that they would do better without us than we would without them! Can't and wouldn't dare argue with that. Scott's vocal is as usual excellent and the harmonies strong, with thudding bass and percussion allied to the banjo, piano and guitar on a song that varies the tempo throughout. Finally, Kitchen dance party on is a song that has what is virtually a rolling barrel house feel with a lively lead and harmony vocal supplemented by piano, banjo, bass and percussion on a highly up beat and humorous tale.
This is another tremendous album that further boosts Scott Cooks high class catalogue of excellence. The album creates a warm, easy going atmosphere but thanks to the incredible quality of the songs, it is a recording that lifts him way above most of his peers. Add to that the quality of his musings and the stunning photography and this really is an album that you need the hard copy of rather than downloads!