VICKY EMERSON -
WAKE ME WHEN THE WIND DIES DOWN 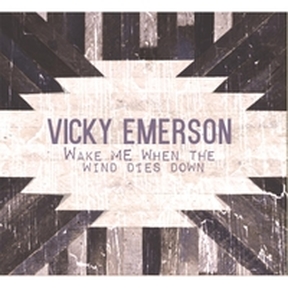 There is so much about this album that made me think it could well be Vicky Emerson's debut. From the freshness and inventiveness of her lyrics and melodies to the varied arrangements and tempo's it was pretty obvious that this is a talented young woman who has absorbed Emmylou and Lucinda's music along with many other influences and then come up with her own take on melodic roots music. There is such a variety of textures and emotions that it has the feel of a debut recording by someone who has been saving up their life experiences and ideas and then pouring all of them into that first recording. All of the above is correct but with one exception. It almost beggars belief but this is her eleventh album and whilst writing that phrase I still can't believe it. There is so much invention and originality in this recording that I can't believe I wasn't aware of Vicky before; I would have expected someone as capable of making an album as good as this one to be a household name everywhere. During a career that has lasted for much of this century so far it is impossible to accept that this is her first great album so it is probably more a question of miserly promotional budgets that have held her back, as is so often the case. Whatever the reason she has certainly cracked it with this recording, 'Wake me when the sun dies down.'
All of the songs were written by Vicky, with two of them being co-writes with the albums producer Matt Patrick who deserves huge credit for a production that couldn't really have been bettered. They were helped out in the studio by musicians of the calibre of Steve Goold, Ian Allison, Jake Armerding, Aaron Fabbrini and Steve Bosmans. It is so pleasing to write that even the percussion and bass, so often sounds that are pretty much ignored or taken for granted in simply being used to form a solid foundation, are pretty much equal in the mix and even bring a little invention and an extra melodicism to the songs.
Whilst ballads are the dominant feature of the album there is so much variety, beauty and where necessary an intense sense of drama in their makeup that the album is never boring, in fact I would have rated it even higher and enjoyed it even more had it contained more than ten songs and lasted for twice as long! I've heard plenty of albums that are rooted in country music and contain a preponderance of ballads that have all of the edges sandpapered to such a smooth sheen they are forgotten before they're even finished. That is most definitely not the case here! This tremendous recording is lifted by the fact that whilst there is great beauty there is also an almost indefinable edginess that creates a reality laden atmosphere around the songs. Vicky's vocals are both beautiful and manipulative, giving her the ability to express a wide range of emotions and indeed tempos; varying songs, dependant on lyrical content, from a lovely warm lightness to great emotional depth.
The album opens with a melodic guitar intro on Under my skin, a 'spiky' song that promises much, then delivers when Vicky's gorgeous vocal comes in confirming the quality that is about to be unveiled. It certainly has a country feeling but with that nice 'edginess' that always appeals, at least to me. The melody and the arrangement are both excellent on a beautifully performed mid tempo song about someone who is smitten, now all that remains is for them to get together! An intensely dramatic fiddle intro gets Long gone up and running but the mood is soon lifted by the tremendous bass line and percussion, backed by some melodic guitar tones and accordion on a lovely mid tempo 'country' song that also includes some arid twang alongside Vicky's beautifully expressive vocal. There is a melodic 'country' guitar intro on Save all my cryin' (For Sunday afternoons)a slow moody ballad that is backed up by the usual percussion and bass, with gorgeous steel guitar and a twangy guitar solo that would have suited both Emmylou and Lucinda despite their contrasting styles. It is an absolute stunner of a song that, from the lyrics to the instrumentation and Vicky's vocal, is as near perfect country balladry as I've heard for a very long time. Dance me into the night is another slow, moody, but hugely atmospheric and beautiful ballad with the melodic instrumentation rooting the song and with the fiddle playing around the melody adding to an atmosphere that conjures up a late night in a near empty bar in a hot climate! The album finishes with Follow the moon, a lovely upbeat country song with fiddle, dobro, mandolin and the usual bass and percussion driving things along at an easy going pace. Vicky's evocative vocal is allowed plenty of breathing space on this song as it is on everything on this outstanding recording, in terms of production as well as the writing, playing and vocals and with ten arrangements that are just about perfect for purpose!
After listening to this gorgeous recording countless times it's my feeling that Vicky Emerson, in many ways similar to the already mentioned Emmylou and Lucinda, bridges the gap between the edgy side of country music and the mainstream, something that we would ordinarily expect to lead to the huge success enjoyed by the above two women. If this is an example of Vicky Emerson's quality that will surely happen sooner rather than later. Can't wait for her next album and now I'm off to explore some of her back catalogue! If you listen to this tremendous recording I have no doubt you will too.