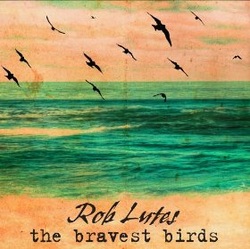 
I first became aware of Rob Lutes about three years ago when he played a tremendous set at a venue in Brighton and I, along with the rest of the crowd, was hugely impressed by his raw but melodic vocals and his unusual, if virtuosic, guitar playing. This spurred me to purchase several of his four studio albums with Rob sending me a copy of his 2011 live recording that he made with Rob MacDonald, another guitar virtuoso who also helps out with electric and resophonic guitars on this album. These recordings were all as impressive as his live performance, so the question has to be, is this new album up to his usual standard?’ The answer to that is an emphatic ‘yes,’ in fact after a half dozen or so listens, my feeling is that it has surpassed his previous recordings, despite their uniformly high quality.
His vocal style is at times a little reminiscent of someone such as Chris Rea, having a depth and raspiness that is quite natural, but Rob seems to imbue whatever he sings with more character and soulfulness, as well as more originality. He is more than ably assisted by the already mentioned Rob MacDonald, as well as Mark Nelson on drums and percussion, Rob Fahie, upright bass, Denis Ducharme on piano and Josh Zubot plays violin, plus a number of guests such as Josephine Von Soukonnov, Dale Boyle and Fred Bouchard. Players of this quality do the generally sparse songs no harm whatsoever, obviously having great sympathy and empathy with the writing, not using any unnecessary histrionics, just high quality playing that allows the stories and the emotional content plenty of breathing space.
All of the songs are performed at a slow to mid tempo and generically blend a rootsy folk, blues and country with the natural soulfulness that Rob brings to all of his performances and overall the album has a deeply rural feel. There is nothing that can overtly be attached to any one of the above genre’s but each can be recognized in most
of the songs ensuring that this excellent album has a lovely flow from one song to another. All songs are written by Rob Lutes except for a couple of co writes with Dale Boyle and one with Monique Riedel plus Loudon Wainwright IIIs Natural Disaster, which to my ears is actually better and more heartfelt than the original. There are some powerful themes at work on some of these songs that often seem to delve into the workings of the human mind and the emotions that are at work in most of us, in fact many of the songs carry a strong feeling of philosophical contemplation, as if the various acts have been carried out and the consequences and solutions are becoming a little clearer. Even without the lyrics, the music has that air about it.
The Ship That Sails Today is the album opener and sets the scene for the tempo and atmosphere that is to
follow with it’s nice slow bluesy feel with some lovely melodic guitar work and violin on a seafaring tale, followed by Things We Didn’t Choose with more of the signature guitar excellence and a lovely uplifting fiddle on a tale of
compromise. Still Dark is a heartrending lost love song that dredges up all of the pain and feelings of hopelessness that this implies, on a slow moody atmospheric tale that has the same instrumentation as previous songs with beautifully melodic haunting guitars and percussion. This is followed by Floating a lovely percussive song with
melodic guitar and straining violin, with the chirpy jazziness of the music contasting with the contemplative, descriptive story that probably contains the most poetic lyrics of any song on an album of strong poeticism. In it’s way quite a stunning song, the meaning of which I’m still not quite about! Ithaca Waterfall contains a beautiful twangy guitar on a tribute to the falls that is in many ways a gentle metaphor for the way nature destroys and replenishes and finally there is a soulful jazziness to As My Heart Will Allow, a song that states ‘Why things are built and laid to waste’ as an analogy for a broken relationship that he just can’t get over, with the atmosphere enhanced by a haunting dobro in the background.
This is an album that is often quite challenging to unravel, but is ultimately a rewarding and outstanding listen, even when compared to his back catalogue of excellence.