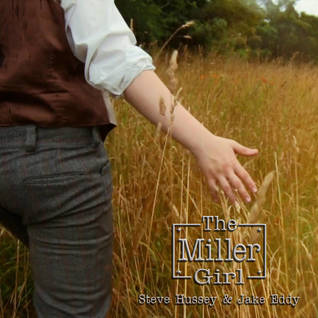 The Miller Girl is, at least to me, an album that virtually defines 'Americana' music, with its strong elements of folk, country and to a lesser degree bluegrass. With its soft tones and warm mellow vocals the listener can, at least initially, be forgiven for thinking the album sails fairly close to many of the elements in 'mainstream music' with its soft tones and even its production occasionally coming across as being a little too mellow. It takes very few listening sessions to realize that particular first impression doesn't actually define this excellent album. Just as a song seems to take on that mantle of mellow comfort these two talented musicians pull a rabbit from the hat, as the listener (certainly this one!) realizes that a song that perhaps seemed a little too mellow has taken on an extra dynamic quality or even a dramatic note, certainly lyrically, that sometimes can become quite tense.
So, you will gather from the above that this is a recording that unfolds slowly and over a period of time becomes quite revelatory in its subtle variations and nuances. Much of that is brought about and given a strong individuality by the excellent restrained arrangements that, perhaps more so than most other albums, allow the lyrics the space needed for them to draw the listener in. Steve wrote all ten of the songs on this album that was originally a project for his wedding, although both he and Jake collaborated on these fine arrangements. There is a conceptual quality to the album as the subject figuratively journeys through life's trials and tribulations before eventually reaching a stage of virtual fulfilment, enabling the listener to understand the wedding link!
Steve is a well known leader of his own 'Steve Hussey Band' around the West Virginia and Ohio area of the U.S and takes all lead vocals whilst also playing acoustic guitars, guitarlele and ukulele with 17 year old (at the time of recording) multi instrumentalist 'prodigy' Jake Eddy playing acoustic guitar, banjo, mandolin, ukulele, guitarlele, upright bass and dobro.
There are often quite intense lyrical dramas within these songs, not in terms of 'murder and mayhem,' but the more subtle colours of the dramas that beset us as we go through life. It is also a fact that some of the songs on this duo album create an easy going atmosphere, at least sonically, in much the same way as some of the late great John Hartford's albums. There are even occasional notes of humour; certainly not comedy, perhaps tongue in cheek, but the often dramatic quality is alleviated with a little lightness that adds to the variety. As to the melodies; there are some strong 'ear worm' melodies that are difficult to shake off, always assuming anyone would want to and whilst it is a lyrical album all of those melodies are excellent.
The album gets underway with a nice easy going banjo and acoustic guitar on Little shove, soon joined by Steve Hussey's warm vocal giving an excellent song the same easy going charm as the late John Hartford. The song gradually builds in power as the percussion and bass bed things down, with nothing ever overdone or spectacular just a very good song well sung and played. That is followed by Into the ether, with acoustic guitars and banjo getting the song underway on a haunting slightly spooky tale, propelled by the thudding bass and the warmth of the lead vocal and harmonies on another really good song, this one starting to become an ear worm! On Long list of goodbyes a lovely speedy banjo and acoustic guitar get things underway, soon joined by Steve's excellent warm vocal on a song that whilst thematically serious does have a little lyrical lightness in its makeup. Master your mind is another strong song that has an almost threatening edge with the rawness of the vocal and the dynamic attack of the banjo, aided by the thudding percussion and bass. An acoustic guitar opens the title track The Miller Girl, soon joined by banjo, fiddle and Steve's excellent lead vocal on a powerful folksy song. The mandolin, thudding bass and powerful percussion, with some excellent harmonies add to the song and because of the extra instrumentation this song brings an added dynamism to the album on a powerful love story.
Whilst I wouldn't say this excellent and varied album brings a new dimension to roots music it is a very good debut recording that gradually inveigles itself into the listener's consciousness and promises much for the future of these two talented musicians.