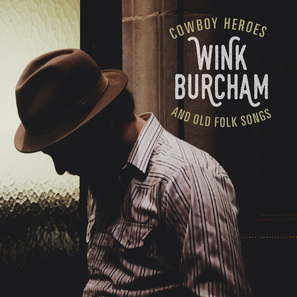 This tremendous, thirteen song album of classy song writing, warm evocative vocals and excellent playing is actually a compilation of tracks from Wink's previous two albums, 'Comfortable shoes' and his debut 'Irene Vennie.' The idea behind it is to break him in the UK and the rest of Europe, something that should be a piece of cake judging from the quality of everything on this disc and indeed, those first two albums.

This Tulsa native plays an edgy brand of country, folk and blues, all performed with a tremendous depth of soulfulness and plenty of variety, with a seamless blending and any one of the various genres to the fore but not stylistically exclusive. He is the possessor of a vocal style that hasn't really been bettered in the broad roots music field, varying from an easy going warmth to a raw deep intensity dependant on the songs requirements.

Whilst he doesn't possess the classic country voice of a Cale Tyson or Sturgill Simpson, the quality of songs and vocals are a match for those two but with more variety in song styles and his appealing vocal timbre. His song writing has a descriptive grittiness that roots the stories in the real world, drawing sympathy and in most cases an understanding from the listener that just a few others are able to achieve. Atmospherically those stories range from slow and moody to deep and dark then to a speedy mid tempo and on to a lovely lightness but always with a versatility and stylistic fluidity that sets him apart from most of his peers.

Any comparisons are, at best, tenuous but fellow Tulsa native, the late great J.J. Cale comes to mind as far as ploughing his own musical furrow goes, as does the also late great Gene Clark. There is a much larger stylistic area covered by Wink Burcham than by Cale but the strong individuality is there for all to hear. Whilst other than in terms of quality there are few similarities to Clark he does inhabit a similar generically ambiguous area to him albeit with more of a country, and sometimes blues, leaning.

His vocals are warm, but there is a distinct and appealing edge to whatever he sings, with his voice being the glue that binds the diverse styles together, something that signals a talent for whom there are few if any limits to what he can and does attempt; all so far successful, at least artistically. My advice would be to buy his first two albums, both of which are readily available because I guarantee that if you buy this excellent 'compilation' your next purchases will be that first pair. Like me you can then bask in the glory of having discovered a rare talent!