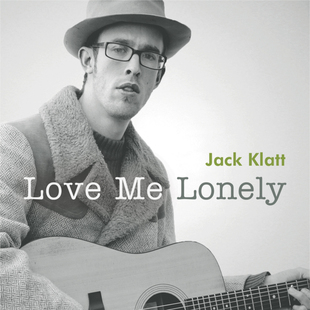 
An album that covers so many apparently disparate styles is simply asking for trouble, or so I thought! The fact that this new offering by Jack Klatt succeeds so well says a huge amount about not only his song selection, (oldies as well as his own originals) or his guitar playing prowess but also is a tribute to his tremendous vocal style that was not always so easy to concentrate on in a band setting. Certainly the stylistic
variations that Jack has mastery of are more obvious in a band setting where the fuller instrumentation emphsised those variations, but this solo vocal and acoustic guitar setting do give more emphasis to those vocals. You always get plenty of feeling from Jacks singing but with this being so sparse he is able to stretch out with his often emotionally drenched vocals, getting the best out of some tremendous songs. Over the years so many acoustic guitar and vocal albums have simply struck me as a pleasant listen, but too often can be bland. That is certainly not something that anyone can say about this tremendous sixteen song recording.
This is his third album, but his first solo, the previous two being made with the support of his excellent ‘Cat Swingers’ and guests. Whilst there is always a little of the vaudevillian feel in his music it is blended with folksy
old time country, blues and even a little jazz, in fact much of what makes up the roots genre but with just Jacks acoustic guitar and vocals. This removes the generic boundaries that allow the listener to think ‘this is a blues’ or ‘this is country,’ in many ways blending the styles more than on a full band album and allowing the songs to speak for themselves with absolutely no window dressing.
This, as with several recent excellent albums is produced by Dakota Dave Hull and recorded at his Arabica Studios in Minneapolis. He is not only a tremendous producer of albums on which the songs are always allowed plenty of breathing space but is also a virtuosic guitarist in his own right.
The songs come from quite a number of different sources such as Fats Waller, traditional, Blind
Willie McTell, plus six Jack Klatt originals that stand up so well in this company that there is never any loss of quality in the writing from start to finish. Basically Jack isn’t controlled by any generic boundaries, instead going
with the attitude that if he likes the song he will give an interpretation of it, a premise that makes this album just as required a listen as his band albums and ensures that the listener will never get bored, but will be kept wondering
what he will come up with next. The first four songs serve as an example of his diversity, with the first being an excellent bluesy version of Fats Waller’s The Panic is on,followed by the classic country ballad made famous by Johnny Cash, The One Rose (that’s left in my heart), which is so different to Cash’s version that comparisons are pointless, but suffice to say that Jack’s version brings more of a subtle sadness to a song that in Cash’s hands seemed to be  …. well…..typically Johnny Cash! Following this is a tremendous reading of the classic traditional blues of Leavin’ Home and this again is not put in the shade by the best of the countless other recordings
of the song, followed by his own gorgeous ballad, Train Song. The title track Love Me Lonely is a beautiful heartfelt Jack Klatt original ballad that is at least the equal of some of the old songs and easy to imagine
being recorded by any number of other ‘country’ singers. To illustrate the fact that Jack doesn’t rely on other writers for his diversity this song is immediately followed by another of his originals, this time one that echoes an old time vaudevillian atmosphere inYou ain’t gonna steal my love, proof if needed that he can write in pretty much
any musical style of his choosing.
All in all this excellent album is a very successful fulfillment of Jacks ambition to record a solo album and I for one have no objections to his doing the same in the future, just as long as he keeps the ‘Cat Swingers’ albums going as well!