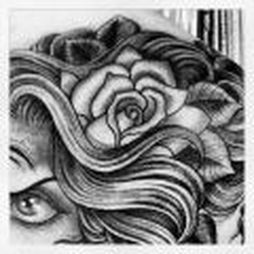 
Sometimes I will play an album for the first without doing any background checks on the artist/band even if I’ve never heard of them before. At other times I will check the lineup and what instrumentation they use before playing. This recording came into the latter category and first thing I found was that they are a Scottish band. That presented no problems, because there are many fine Scottish bands with their roots in country music. I then noticed their current lineup includes eight people and the ‘usual’ country instrumentation but with the inclusion of saxophone and trombone, which filled me with foreboding! My main concern when a band is this size and ‘blatantly’ adding disparate instruments is that they are merely looking for an edge that will hopefully make them sound different to anyone else. Often bands that do this have little or nothing else to back it up or any fully formed direction or ideas in their music other than the hope that the brass will help to fulfill their ambitions.

After just one play it became obvious that this band are in a different universe to that last category, in fact their sound is not only different but is a fully formed offshoot of alt.country or country rock, with the inclusion of the brass actually adding a different dimension to country music, or perhaps Americana?  The label is not really important but this tremendous recording does bring a little more variety, texture and colour to what time may prove to be the band’s very own sub genre of roots music.

The Red Pine Timber Company were formed in Perth, Scotland in 2009 and have worked together ever since to produce their beautifully full and varied sound culminating with this tremendous debut album. The band consists of Gavin J.D. Munro on vocals and guitar, Dave Shaw plays upright and electric bass, Mikey Maclennan, drums, Dave MacFarlane, fiddle, Katie Whittaker on vocals, Felix Milan,  saxophone, Chris Marshall plays trombone, harmonica and vocals and Stewart Methven on guitar, mandolin, lap and pedal steel guitars. Munro (ex Southpaws) also wrote all of the twelve original songs on this album. Something that adds to the unusual nature of the recording is that only one song clocks in at less than four minutes, whilst five are over six minutes, including one that is over seven! The recording clocks in at more than an hour but never ever feels overlong, with the longevity of those songs being essential to the fact that there are quite a few epics some of which have a broad cinematic feel. Although they have that full sound it never comes across as a tidal wave of instruments and there is often a subtlety to their arrangements but without ever being deemed sparse!

First song on the album is the almost ecstatic Lonely Days Are Gone, with its jangling guitars and a nice drum support providing a full sound, with excellent lead vocal from Gavin Munro and harmony vocals from Katie Whittaker, joined by the saxophone on a song that has a classic country rock feel and a powerful sense of drama on the tale of an ex lover who is returning home. Sweet Seville at times has the atmosphere of a classic country rock song and starts with a lovely chiming mandolin before the excellent banjo, bass and percussion come in on a very good mid tempo song. They are joined by the saxophone which broadens the atmosphere and gives an unusual dynamic to a tale set in a Spanish brothel in Seville! It really shouldn’t work, with the mandolin and sax being so dominant but the clever arrangement never lets the two clash discordantly, in fact it works beautifully and has a tremendous sense of power without appearing to try! Dark Clouds is a real beauty with its lovely deep twangy guitar and banjo soon joined by bass and percussion on a just about mid tempo country rocker that has a nice rolling flow to it. The trombone adds a little more colour on the tale of someone desperately missing a lover who will not return, with Munro’s excellent pleading vocal supported on the harmonies by Katie adding to the desperate sense of longing. There is a tremendous chiming guitar solo added to the mix which further lifts this excellent song. Hurricanes is another gorgeous ballad, this time with the fiddle driving the song along at a nice sedate pace with the usual excellent percussion and bass with excellent male lead vocal and female harmonies on the tale of someone who can’t cope with being left by his lover. A stunningly beautiful ballad with excellent poetic lyrics that in a few short sentences paint an epic picture making the listener wonder, did he do it or didn’t he? No Direction includes a lovely acoustic guitar and crying steel guitar on a gorgeous ballad with Katie’s lovely lead vocal taking first verse and Munro taking the next with sparse instrumentation and a slow moodiness before upping the density and feel when joined by trumpet and trombone and a heavier bass and percussion on another tale that bemoans a lost love. Final mention goes to The Speaking Of Your Name a country duet that strongly evokes Gram and Emmylou on a sad ballad that has a lovely steel guitar allied to the usual excellent percussion and bass foundations, before eventually being joined by a haunting fiddle on the sad tale of two lovers who have split up, possibly mistakenly? A real beauty of a song that is as powerful an evocation of Gram and Emmylou as I can remember!

In some ways, particularly as it’s their debut, this album could be termed experimental, despite being fully formed, simply because of the diverse instrumentation. Time and the paying customer will decide how well it has worked. As far as I’m concerned it works perfectly and adds a little more diversity to ‘country musics’ sug genres. ‘Different Lonesome’ is an excellent and hugely entertaining album that includes some riveting stories and atmospheres.