THE HIGH BAR GANG -
SOMEDAY THE HEART WILL TROUBLE THE MIND
​ 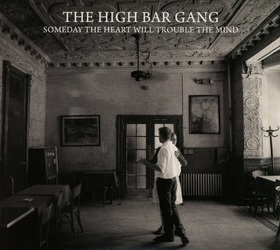 This is the second album released by the Canadian seven piece old timey/bluegrass playing High Bar Gang and follows on from their much vaunted debut 2013s “Lost and Undone: A Gospel Bluegrass Companion.” The band consists of Dave Barber on banjo, mandolin, guitar and vocals, Kirby Barber, vocals, guitar and bass, Rob Becker, bass, Barney Bentall on vocals and guitar, Wendy Bird, vocals and guitar, Colin Nairne plays guitar, mandolin and vocals with Shari Ulrich completing the picture on vocals, fiddle and mandolin.
The thirteen songs on this exemplary album are 'covers' of songs from a variety of distinguished writers ranging from Steve Earle to Peter Rowan, back to Roy Acuff and Hank Williams to name just a few. The band has lead and harmony vocalists who are able to cope with just about any situation or song and have the ability to generate the 'high lonesome' sound, seemingly at will, something for which much of the music on this recording has been known and would be lacking in power without. There is no chance of that happening with musicians of the quality on show here and whilst the songs are from the pens of a variety of  writers and indeed eras they are able to fit everything together and give the album its own individuality. Often with a band that includes so much versatility things can become a little disjointed but this group of musicians stick to a sound and an instrumentation that allows a variety of arrangement textures but locks them into what is predominately their own genre.
The album gets going with the banjo on Silver dagger but is soon joined by a gorgeously evocative and folksy female lead vocal that is soon joined by fiddle and a thudding bass before the gorgeous harmonies add yet more colour alongside the mandolin and guitar on a beautiful version of the Dolly Parton composition. The mandolin, fiddle and bass intro lead in to Branded wherever I go, a Roy Acuff song that captures the feel of an old Carter Family performance with the male and female harmonies, but with a male lead, on another song that captures the classic high lonesome feel that blends old timey and bluegrass, with the former being the predecessor of the latter! The fiddle, banjo and bass get One I love is gone off to a mournful start before the exquisite harmonies come in on this Bill Monroe penned song. The band bring a different perspective to this song to that of the original as they do most songs on the album. It is probably that which makes it easy to accept that the album contains all 'covers' and as I've already said ensures a little originality, despite all of the songs being recognizable. There is a lovely mellow blend of instruments that includes fiddle, guitar, mandolin and an excellent male lead vocal on Peter Rowan's Cold rain and snow. The combination creates an intensely dramatic and realistic atmosphere, at times the vocals sounding a little like a young Stephen Stills, lifted by occasional female harmonies and a haunting fiddle solo. Rock salt and nails is subjected to a lovely banjo, mandolin and guitar arrangement with an excellent male lead vocal on Utah Phillips much covered song. Eventually the fiddle comes in with some vocal harmonies giving the song greater depth to such a degree that there can have been few superior versions of the song.
The band is renowned for the quality of their lead and harmony vocals and listening to this excellent album it is easy to hear why. They cover many aspects of the named genres and thanks to the skills contained within the band; on several of the songs it is difficult to picture the originals. That really is a mark of quality. As usual I would rather the band played and sung their own originals especially when some of the songs are not all that old but it's churlish really to complain when a group of musicians inhabits so many of the songs as if their own. All in all this is an excellent album by a talented band that brings a slightly different and individual perspective to the compositions of others and in fact few can have performed many of these songs better than on this album.