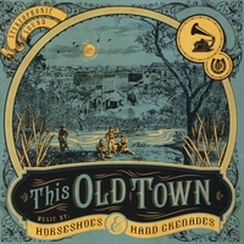 
Hailing from Wisconsin the talented Horseshoes and Hand Grenades certainly believe in value for money with this eighteen track album clocking in at well over an hour. Fortunately that value is not just in terms of album length, the same applies to the quality of this excellent recording that has been gradually revealing more and more depth with
each play over the last couple of weeks.


To my knowledge, and perhaps surprisingly, this is only their second recording, although there was an album by (and self titled ‘Horseshoes & Hand Grenades’) released back in 1996 but on listening to a few samples it definitely was not this band! I say ‘surprisingly’ because although I don’t know much about the band their playing seems to show a virtuosic confidence that only comes from constant playing together over a long period of time and a fine attunement to what they are trying to achieve. They are just as at home on the slow moody sensitive songs as they are on the fiery
upbeat variety and at eighteen songs there are plenty of both!
The band consists of Adam Greuel on guitar, dobro and vocals, Collin Mettelka plays fiddle, mandolin and vocals, Davey Lynch, harmonica, accordion, vocals, Samual Odin on bass and vocals with Russell
Pedersen playing banjo and fiddle as well as vocals. The lead vocals often have a rawness to them and are always evocative with the excellent harmonies on this album that is given a further lift by their highly descriptive
songwriting that in many cases lifts them above many of their peers. I don’t know how the songwriting is split within the band but it is certainly true to their background, with a strong water dominated rurality flowing through most of these excellent story songs.
Their blend of old timey, bluegrass and folk has a lot of originality, with every instrument playing it’s part on an album on which even the bass gives far more than just a solid foundation, adding to the power of every song, in fact just about every instrument used plays a lead part at some stage in the proceedings. They also seem to use the harmonica more than most, giving a further diversity to their sound that often brings a different atmospheric slant to the songs. It’s almost as if their skills are so exceptional they make even experimentation seem fully formed!
The songs are all uniformly excellent and include two instrumentals, one of which is a tremendous harmonica solo. There are a variety of tempos, from slow and moody to upbeat and speedy with the subject matter and the powerfully evocative atmosphere rooted in the rural backwoods of Wisconsin. The tremendous title song This Old Town consists of powerful harmonies on a tale of feeling trapped in small town America, with the usual hard driven instrumentation consisting of bass, acoustic guitar, harmonica, banjo and mandolin. The gorgeous Wisconsin Water starts with a slow moody intro with gently plucked acoustic guitar and banjo before vocals, fiddle and bowed bass come in on this slow moody and melodic tale aided by harmonica. The song has a lovely gentle almost homely atmosphere given even more of a lift by the terrific harmonies. River Rat is another excellent slow moody tale with a good vocal and harmony again with nice harmonica, banjo and fiddle on an excellent descriptive lyric with a sound that slowly builds in intensity on the tale of someone who can’t envisage anything more idyllic than living life on the rivers (not a bad judge!) and includes an excellent bass line and the usual perfectly blended instrumentation. Nations is a a sad lonely tale of poverty, with evocative lead and harmony vocals on a song that creates a sad feeling of hopelessness, with lovely banjo and fiddle for accompaniment before the atmosphere is given a further lift by a beautiful accordion sound. Analease starts as a speedy hoe down with bass, fiddle, harmonica, guitar and banjo on a mid tempo lost love song that has a genuinely high lonesome mountains
atmosphere. Perhaps the most unusual song on the album is The Vilas Hilton a song that works well and as an experiment was well worth the effort with the excellent bass and fiddle building an atmosphere behind the
excellent vocals. Rivers High brings a a slow moody conclusion to a tremendous album on a song that evokes ‘The Band’ with it’s lonesome outsider feel and sparse but deeply atmospheric sound. It’s easy to visualize Levon and Richard sharing vocal duties! Aaaahhh if only! We can dream but fortunately don’t have to whilst listening to this great band on their tremendous ‘difficult second’album!