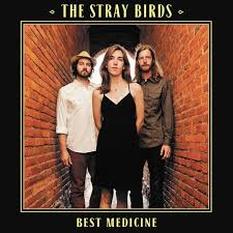 
The foundations of ‘Best Medicine’, as with their tremendous self titled debut, seem to be folk music but with the addition of a little country and blues influence, with those influences now further extended on this tremendous recording to include an often discernible thread of jazziness.

The trio hails from Lancaster, Pennsylvania and consists of all multi-instrumentalists and vocalists, Maya de Vitry, Oliver Craven, and Charlie Muench. The instrumentation is quite sparse but the sound has a lovely fullness, signifying excellent well thought out arrangements and yet there is often also an improvisational feel, although perhaps it is just the effect of listening to virtuoso performers at work extending themselves as far as the music allows. They have the ability to really push on with songs that need to be played fast and are just as expert where restraint is called for.

As to the songwriting, just two of the songs are traditional, six were written by Maya De Vitry, three by Oliver Craven and one co-write by the pair. Maya has an incredibly warm, powerfully expressive vocal style that sometimes reminds me of artists such as Iris Dement or even Gillian Welch, enabling her to elucidate any little nuances on any song, no matter how obscure that nuance might be. An added bonus is that Oliver Craven is also an excellent lead vocalist, stylistically different, but that just adds to the appealing diversity of the band sound. Add the band harmonies and you have a hugely appealing vocal sound that makes the purchase of their albums more than worthwhile and that’s without taking into account the mastery of their instruments, which is second to none, enabling them to follow wherever their musical muse leads them on this beautifully melodic


They summon a lovely reflective yet spacey atmosphere on all of the songs they perform enabling the listener to be drawn through the variety of emotions that are summoned up. Certainly both vocalists are able to express as comprehensive an array of emotions as anyone could wish for in their music, exacerbated by those extraordinary harmonies.

On Adelaide Maya produces a dark intense lead vocal with the tension further deepened by the exceptional harmonies on the chorus, supported by the lovely meandering fiddle, mandolin, double bass and acoustic guitar on this intensely dramatic tale. This is followed by the contrasting but no less dramatic Feathers and Bone which sees Oliver on lead vocal. The banjo, acoustic guitar and Olivers warm expressive vocal drives this lovely reflective ballad that is eventually joined by fiddle and gorgeous atmospheric harmonies. There is a tremendous mid tempo version of the classic traditional song, Who’s Gonna Shoe,  with Oliver and Maya exchanging verses then joining on harmonies, supported by fiddle and acoustic guitar plus bass. Sometimes it is noticeable on updated versions of old classics that the vocalists can exhibit an almost shy restraint, as if they are worried about comparisons, but not so with this trio that give a forceful, no holds barred rendition of the song, virtually making it their own. Never For Nothing is dominated by a lovely lead vocal from Maya on this gorgeous meandering slow ballad with instrumentation led by piano, with bass and quiet gentle acoustic guitar for company. Pallet is an up tempo traditional, fiddle led blues song that the Stray Birds stamp with their own inimitable style that almost has a jazzy feel on this song in particular, with Oliver on lead vocal supported by tremendous harmonies and acoustic guitar and bass. The album closes with Maya on lead vocal on Might Rain, with yet more great harmonies on a slow moody tale on which the fiddle and banjo help create a high lonesome atmosphere.

To quote a line from the title song ‘My music is the best medicine I sell.’ No one who listens to this tremendous album will argue with that and with this ‘difficult second’ album surpassing their debut I think this talented trio will continue to treat us with the ‘healing power of music’ as someone once described it to me!