Carolina Still - The Color Of Rust 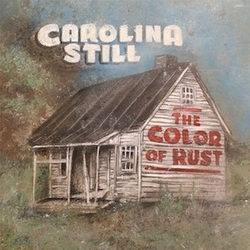 
If ever a band could be said to perform the music they were born to play, it has to be Carolina Still. The four members of this tremendous band grew up in and around the farming communities of the Carolinas and Kentucky. Steeped in traditional old timey music and bluegrass
they bring an additional modern punk/rock attitude to their all original songs that could easily have been written and performed eighty or ninety years ago. The music is raw, heartfelt and powerful, most of the songs being written around the lives they know and expressing the love of the life as well as the hardships suffered in small community life.
This is only their second album but they have been honing their craft for most of the last decade playing up to 200 gigs a year building their reputation as a band that must be seen live, although I’ve yet to do so and I suspect it will be some time before that situation can be remedied! It is an album that consistently reaches and at times surpasses their incredible 2011 debut ‘Distiller,’ an album that had such an authentic ‘backwoods’ or ‘hillbilly’ feel that I naively thought it to be unsurpassable! This one has a similar raw, ramshackle feel with untutored but melodic vocals, excellent harmonies and the always nicely balanced instrumentation that is often dominated by the hard driving fiddle but not excessively so. There is a fire and
passion in everything they do that enhances the power of the album and shows not only their total commitment to what they are trying to achieve but also ensures the listener knows just what a good time the band are having performing these songs.
The lineup is the same as on the previous album, which means Billy Smith is on drums and vocals, Adam Jones on upright bass and vocals, lead singer on most songs is banjo picker and guitarist Justin Casey with the skilfull fiddle playing as well as vocals of Robert Norman making a perfect tight knit band, who thanks to all being good singers, provide some excellent four part harmonies into the bargain. Although Justin writes many of the lyrics it isn’t unusual for them all to chip in with verses to various songs, making the album very much a collaborative effort between all four members. Most are story songs relating to aspects of the life they know, with subjects covering farming community living, coal mining, the outlaw life, murder ballads and even one tremendous instrumental, with every tale being completely believable thanks to their obvious commitment. Thematically it is as dark and down to earth as ‘Distiller’ but there is sometimes a thin veil of humour on some songs, however, don’t run away with the idea this is a comedy album. It is a long long way from that!
Album opener The Color Of Rust is also the title track, a terrific up tempo old timey song with a catchy melody and hard driving melodic fiddle and snare on a sad tale of extreme poverty in the farming community. Hog
Killin’ Time has a slightly sinister ‘backwoods’ feel, being another speedy punked up hillbilly song with sawing fiddle driving the story on a tale again rooted in farming life. Black Lung is a great song and is musically much slower and mellow although the subject matter is a long way from mellow. With fiddle, banjo and nice dobro as well as drums it is a sad ballad about the suffering of the inhabitants of coal mining communities, with excellent evocative harmonies on a tale that really builds the perfect atmosphere for such a mournful story. Murder In The Pines is another tremendous song with  a dark story line. We’re back up to mid tempo this time with a nice harmonica sound propelling the song, with acoustic guitar and drums and a nice walking bass line providing support on this
excellent as well as evocative ‘murder ballad.’ Pistol Packin’ Mama is a tale about living the dangerous outlaw life without any obvious  cares, followed by a front porch familial song driven by the banjo on the story of learning about
music from his old Grandpa! And so the album goes on, with plenty of contrasts between it’s beautifully written stories.
Sooner or later one of these talented bands playing in the ‘new old timey’ or ‘hillbilly’ genre is going to strike big and propel the music from it’s cult status to immense popularity. I wouldn’t bet against it being Carolina Still!