RICHIE SYRETT - FROM THE FEET UP
​ 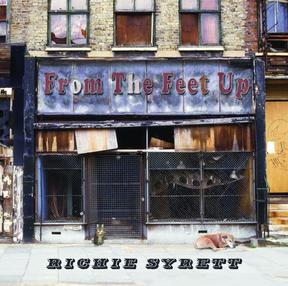 It never ceases to amaze me how artists can plough the many furrowed field that is roots music with a country leaning and yet come up with something new and refreshing. Such a musician is Richie Syrett with this his third album. I reviewed his previous offering 'Good Morning Midnight' in 2012 and was hugely impressed by everything about the album, awarding it four and a half stars and comparing him with the likes of Neil Young, Ryan Adams and even Tim Buckley. So how does this new recording fare? It fares very well thank you and whilst those comparisons still hold good, he seems to have expanded his grasp of roots music, including a little folksiness and even an occasional blues feel, on occasions strengthening the Buckley comparison. All in all his unique style ups the quality by at least a notch, perhaps lessening the comparisons and strengthening his own individuality.
Richie is a talented songwriter as well as having a warm distinctive vocal style that is overflowing with soulfulness, enabling him to cope with a variety of emotions and tempos, whilst every one of his songs has an appealing melody despite the sometimes dark themes. Thanks to the exceptional arrangements the album has a lovely variety of sounds, some edgy, some warm and comforting, meaning this recording should have something for everyone. Overall the album is stylistically ambiguous and yet I always get the feeling that its deep tap root draws its energy from edgy country music mixed with a little folksiness. It is that sort of recording whose songs could be adapted to a variety of roots sub genres depending on the style favoured by any artist who sensibly chooses to record one or more of these compositions. In many ways the diverse styles that create a first impression have all been used before. It's just that the arrangements and Richie's distinctive vocals blend those styles into something that has a strong thread of originality running through it. Very few listening sessions go by before these songs take on a warm comforting tone of songs you have known for a very long time and will remember far into the future, a feeling that is perhaps enhanced by the strong melodies as much as the arrangements or vocals, excellent though they are.
The fact that his regular band is made up of talented people who are sympathetic to each songs needs does no harm to Richie's music. Whilst other musicians were drafted in to help out, his core band is Richie himself on lead vocals, harmonica and guitar, Hannah Ashcroft, vocals and ukulele, Sam Quinn, Fender Rhodes, Lewis Kirk, drums and percussion, Paul O' Sullivan, bass guitar and John Miles, lead guitar.
Things get under way with a plaintive harmonica and acoustic guitar intro on Won't Get Me There From Here before being joined by drums, bass, electric guitars and Richie's distinctive, flexible vocal style. There are some nice harmonies as well on this both excellent and haunting song that has a lovely rolling style. Silhouettes & Outlines is a lovely shuffling easy going song with gorgeous steel guitar and Richie's evocative vocal accompanied by beautiful harmonies from Hannah on another excellent song that is incredibly catchy. On It's Not Dark Yet Richie is again accompanied by Hannah's lovely warm feminine harmonies on a gorgeous tale on which there is the comforting sound of an accordion in the background. The melodic guitar that blends with a percussive shaker adds to the lovely rolling feel of a quite tremendous song that never loses its appeal however many times it is played. Also included in the arrangement are some excellent harmonica sounds and a gorgeous mandolin, adding yet more depth and colour to the song. Abstinence is another excellent song that again is generically ambiguous, other than 'rootsy,' and includes some excellent sax and piano playing that adds yet more diversity to this tremendous recording and helps  create an easy rolling epic feel on the song, with Hannah's lovely harmonies giving strong support to Richie's lead.
I seem to spend more time than I really want to on reviews saying that if this or that artist had a little promotion from a far sighted record company they could become stars, such is their talent. It is always said straight from the heart and with conviction, never more so than in the case of Richie Syrett. Do yourself a favour, if you have any interest at all in edgy country or roots music buy yourself a copy of this tremendous and quite original album. I promise you won't regret it.