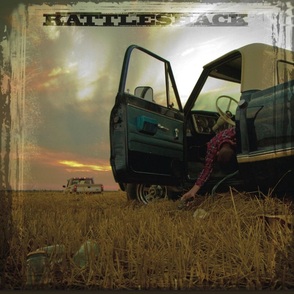 
This tremendous band plays what is basically fiery high energy punked up hillbilly music, a strain that seems to be  gradually evolving into a sub genre known as‘underground country,’ or ‘hellbilly punk’ both pretty good descriptions
really, because it is certainly not mainstream country music! There are even a couple of songs that lean heavily towards English folk, but more of those a little later. On first couple of listens, when I knew nothing about the band, I imagined they were from somewhere in the Appalachians and that it was a nice
touch to have a tremendous female folk singer who could sing with an English accent. Incredibly, they are English, but don’t run away with the idea that they are just copying the Americans, they are a band that doesn’t just play this music but actually have great depth of feeling and a love for this style that is totally natural and without any affectation. They  prove once and for all that British people are quite capable of playing a brand of music that is wholly American, with huge skill and commitment that makes it difficult to tell tham apart from the US originators of the style. They are on a par with most American artists that play this style of music and ahead of many that I’ve heard, often bringing a nice originality to their music that is stylistically diverse but beautifully put together, with the several songs that are rooted in British folk making the listener realize that this is where much of this generic style has it’s  roots.
This tremendous four piece band consists of Andy Stanhope on rhythm guitar, mandolin, dan moi, (jews harp) vocals, Gene Pellier plays  doghouse bass, Georgia Shackleton on fiddle and vocals, with Joe Mason on drums, percussion, vocals. Of the thirteen songs on the album the two English folk ballads are written by Georgia
Shackleton, one song by Gene Pellier and another that he co-wrote with Andy Stanhope and the remainder are Andy Stanhope originals. The songs are classic murder ballads, tales of people just trying to get by, execution, all round evil and self loathing! You might think from that list of subject matter that this is going to be a depressing album but it is incredibly uplifting thanks to the skill and expertise of this excellent band. Every one of the songs has a strong outstanding melody that shines through, inspite of the often fiery hard driving tempo’s, dark atmosphere and lyrical content. It’s these considerations that set them apart from many that just play a punked up version of country. All of this is helped by the fact that the vocals are of a high quality and perfectly suited to what they are trying to achive as are their tremendous arrangements and playing.
Georgia Shackleton takes lead  vocals on the two songs she wrote, Untrue story and Tracey Lynn, and in many ways it is the contrast between these and the other songs on the album, with her vocals blending throughout with Andy Stanhopes, that helps to lift this album way above most of their peers and despite the varying styles brings a nice uniformity to the album as a whole. The roots of most off shoots of country music are European anyway, so it’s nice to hear a band that are not afraid to diversify within the broad constraints of roots music, but tying together two perhaps more insular strains that i’m not aware has been done so successfully before, something that gives them not only a strong individuality but also considerable originality.  Both songs are carried by Georgia’s haunting fiddle playing as well as her beautiful vocals with a tremendous foundation being laid by the doghouse bass, enhancing the powerful atmosphere of each song. The album opener Dead Man’s Creek serves to show the credibility they have in American eyes with the hugely talented Bob Wayne helping out on a song that is a perfect start to the album with it’s evocative fiddle intro on a sinister murder ballad that has an incredibly catchy walking bass line, an excellent melody and Georgia’s harmonies giving a haunting feel. I’m Gonna Shoot That Woman (Through The Head)is, unsurprisingly, about a man planning murder! It has a powerful hard driving drum sound and Georgia’s sinister fiddle on a tale on which the potential killer has no regrets and neither seeks nor expects any redemption, if he actually does it! There is some lovely fiddle playing on The legend Of Jackie Tiger, a classic raw country story with Andy’s atmospheric vocals on a tremendous tale of a mountain man with a family and what he had to do in his ultimately unsuccessful bid to survive. The Wreck Of Duval County has a slow moodily atmospheric start that gradually picks up speed on a dark ‘hellbilly’song that includes excellent driving fiddle and lovely deep bass thud with atmospheric vocal and an ethereal female harmony giving the song added impact on the tale of an evil truck driver who has even deserted by the Devil!
It would be so easy to write glowingly about every song on this recording that contains such excellent playing and singing, with plenty of hooks and memorable melodies, but you really should purchase the album and hear what I’m making such a fuss about. Better yet, see them live. I imagine that would be quite an experience and one I look forward to!