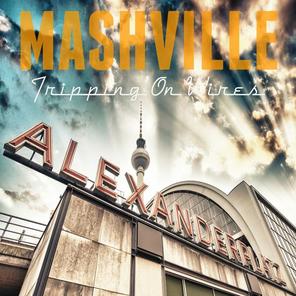 The open spacy sound of this recording sometimes calls to mind a blend of artists as diverse as Steely Dan and Al Stewart. O.k. maybe that's not the best comparison but there are echoes of those two plus much more, culminating in an album that has a great deal of originality. Mashville is depicted as an 'Americana' band, probably quite accurate considering i'm struggling to tie them to any specific genre, although it is true to say there are traceable 'country' elements. Not bad for a band from my 'next door' county of Kent, U.K! Many, but not all, bands from this side of the Atlantic try to Americanize themselves a little too much, losing any real chance of sounding original and ending up often sounding like copyists. Mashville certainly can't be accused of that. They have absorbed their influences from roots artists who range from Dylan, through Nick Cave to the Deep Dark Woods and many more and, importantly, stayed true to who they are by playing music that flows naturally from their songwriters, Graham Loft and Berin Riley.
The band consists of the above two on lead vocals, rhythm and acoustic guitar and lead guitar, mandolin, acoustic guitar and backing vocals respectively. Chris Murrin is on drums and percussion, Pic Hayes, bass guitar and backing vocals and Lyndon Riley on piano, keyboards, Fender Rhodes, flugelhorn and melodica. A nice little diverse mix but the instrumentation is never overwhelming, always allowing the excellent songs plenty of breathing space, in fact, strangely I'm sometimes reminded of the flowing dreamscapes of the Blue Nile. It is that sort of album that brings to mind other artists despite not really sounding like any of them; the lead guitar even has echoes of Dire Straits! None of the aforementioned are bad artists to be compared to and yet these are only vague off the cuff comparisons. The one band they really do sound most like is Mashville and if I'm right in my references, that alone should give them an excellent chance of success, particularly if you include the fairly strong country elements. Their melodies are all memorable and varied and the tempos in and around the 'middle ground,' more than enough to give some bands success but what sets this band apart from the pack is their highly descriptive lyrics. There is nothing profound or earth shattering, but every song contains beautifully written and often quite riveting stories that range through the various aspects of love and life but in a variety of incredibly diverse circumstances and locations.
Graham Loft has a warm expressive vocal style and perhaps it is he as much as anything else that, at least stylistically, reminds me of others. Berin Rileys lead guitar is not only expert but also incredibly melodic, never trying for an overwhelming number of notes when a few will do. The bass and drums anchor the songs beautifully with Lyndon Riley's keyboard expertise adding colour, so here is a band that really has their sound sorted out and are so comfortable with it that they can attack virtually any style within roots music with ease and authenticity. Of the eleven songs, eight were written by the combination of Loft and Riley with the remaining three written solely by Loft.
The album gets under way with a nice acoustic guitar intro on Fragile before being joined by the thudding percussion and Loft's excellent vocal that has a folksy feel similar, to me at least, to the Al Stewart of many years ago. The flowing gorgeously melodic guitar sound ups the quality even further and is joined by restrained piano and organ on an excellent, gentle love song. Turn Your Back is a song that has an incredibly catchy guitar line in the background on a tale of lost love, as the subject sadly realizes there is no turning back of the clock. The restrained organ and percussion are always in evidence giving a lovely firm base for the excellent heartfelt lead vocal. Girl From Smugglers Cove is a tremendous song, led by piano and melodic guitar built on the solid percussion and bass with Graham Lofts excellent lead vocal meandering its way through a paean to a girl who may be too exotic for our hero! There is a heartrending tale of lovers separated by the east west divide in Germany in Beyond The Wall, a dramatically European theme and yet the arrangement has a folksy country rock feel with a tuneful guitar sound and flowing keyboards that echo some of the mellow 1970s country rock. The melody is strong, as is the story and Graham Lofts unfussy storytelling enhances the dramatic dynamic of a beautifully conceived song. Isabella's Shoes is a powerful tale of the horrors of poverty and the lives that some people are forced to endure to avoid it, but ultimately it's the poor who pay. The song is built around people on the wrong side of the Mexican/ U.S border who are so desperate they are prepared to do anything to reach the 'promised land.' It is an epic tale, most of it told with just Loft's evocative vocal and acoustic guitar until a beautiful melodic electric guitar intercedes giving the story an almost cinematic quality. Although set on the American continent the lyrical desperation and sadness are relevant to the current Middle East and European situation.
Ultimately this is an album that reveals more depth with every listening session. It is very easy to get used to this bands ability to set their songs in a relatively sparse musical background but their sound is so melodic it is always pleasurable and their expertise in arranging the songs allows the often powerful story lines to flourish. I don't know how many times I've played this recording but I do know that my listening pleasure in its lovely melodies and quite engrossing tales is still a long way from being exhausted!