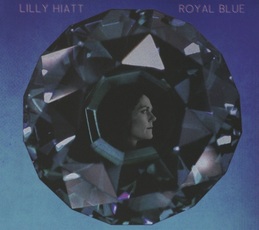 When you think about it there are relatively few women who you can say 'hand on heart' are part of the ever broadening canvas that is alt. country, in fact some of those who are described in that way are not really all that 'alt.' Even some of the men and bands described thus are not, in fact alt. country seems to have gradually developed into an unspecific genre in which we slot everyone who has ever seen a steel guitar and been to a punk gig.
This tremendous new album by Lilly Hiatt, for me at least, epitomizes what I think of as alt. country. It is not pure country because there are too many musical ideas going on for it to be stranded in that catch all. There is a powerful edge to everything on the album, even the softest of its ballads, some of the arrangements perhaps even having a little psychedelic leaning and yet much of the instrumentation is that which is used in country, particularly the steel guitar. Lilly's vocals are warm, beautiful and very distinctive and when allied to the arrangements there is as detectable an edge to her singing as there is her writing. A rare creature on this album is a song that doesn't really have at the very least, vague country elements, all in all leading me to the suggestion that her music is 'alt. country,' or is it? Perhaps alt country doesn't really exist, other than as a term used by 'old hacks' to slot music that possibly has its roots in 'country' but has so much more going on it. To my ears there is country and punk, but also an occasional folksiness as well as perhaps a little 'indie,' and probably much more, whilst her vocals are at times reminiscent of some of the 'girl groups' of the late 1950s and early 60s. Whatever the genre, and realistically it doesn't matter, this new album is a tremendous recording that abounds with originality and ideas that further stretch generic boundaries.
Lilly is the daughter of John, one of the most individual and original songwriters of the last four or five decades and she has certainly inherited his ability to express feelings, many of them on this album being sad. There is a slight problem with the muddiness of sound that on occasions makes her lyrics difficult to hear but in trying to be original I think the synthesizer and occasional 'over production' give a little too much emphasis to the 'indie' elements of the album. It is a very good album but to my ears could have been even better with a little less going on enabling us to hear her vocals with more clarity. Everything is beautifully played but I would love to hear a remix that left out the synthesizers and whilst I've gone on at some length about slotting her under the alt. country umbrella, ultimately this is an album that is difficult to slot into a particular genre with any great confidence! Thematically it is beautifully conceived, with some of the subject matter being arrived at in a quite original way, making it deeply personal, even if musically that muddy sound makes the direction a little confusing. Perhaps the blend of genres is just too much but I love her vocals and her songs, something the muddied sound can't mask!
Slashing guitars with chugging bass and percussion introduce the album opener, Far away, before Lilly's expressive vocal comes in, soon accompanied by the synthesizer on a song that despite its dynamism has an overriding feeling of melancholia. There is a lush full sound on Too bad with guitars and steel guitar combining to give an otherworldly feel to the song with Lilly's vocal sounding like a full blown country singer. The percussion really roots the song, allowing everything else to flow around it with some nice harmonies as well. On Get this right there is a nice guitar sound with some dynamic percussion and Lilly having a powerful authority to her questioning, as if she already knows the answer to 'are we ever going to get this right.' Somebody's daughter is more of a country rocker with some tremendous guitar work but as with many of the songs there is a little too much going on, again creating a slightly muddy sound that on occasions detracts from her expressive vocal style. Finally, Your choice is a beautiful sad country tale of loss with the instrumentation restrained allowing her expressive, feminine vocal full rein on the deep emotional content.
Whilst I've expressed some reservations about the 'muddiness' of the sound this may actually appeal to some listeners, but even if it doesn't, don't let it put you off what is an excellent album of beautifully written songs and lovely expressive vocals with some memorable melodies.