TRAVIS LINVILLE - UP AHEAD
​ 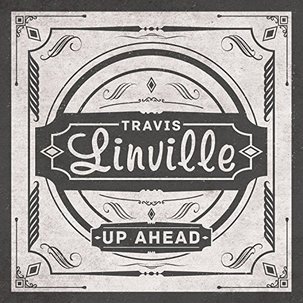 Travis Linville is another artist in an ever expanding line of hugely talented 'Okie' (natives of Oklahoma) musicians whose talents are crying out to be heard by a very much wider audience. This is his fourth full length studio album, with one e.p and a live album also to his name in a highly diverse twenty plus year career that sees him, certainly in recent times, working as a sideman to the also hugely talented Hayes Carll.  Travis was also a member of the Burtschi Brothers, a band whose music quite literally knew no boundaries so it is no real surprise that this excellent new recording also covers a broad canvas albeit within the wide boundaries of 'roots music,' but always underpinned, in varying degrees, by country music.
He is the possessor of a warm, mellow vocal style and is an incredibly talented songwriter who also shows tremendous ability in being able to come up with some peerless arrangements that the listener just knows couldn't be bettered. Each song has a musical atmosphere that is perfectly sympathetic to the lyrics on an album that is somewhere in the middle ground between the mainstream and boundary hugging country music.
For this recording Travis enlisted the help of some great session musicians who have also worked live with him to ensure every song has exactly what is needed, with no histrionics, just beautiful playing. He had David Leach on upright bass, Ryan Jones played keyboards and there were two outstanding percussionists in the form of Matt Duckworth and Mike Meadows with Travis Linville himself taking all vocals, lap and pedal steel guitars, guitars, mandolin and dobro. It is probably pointless saying he is a highly skilled multi instrumentalist, but he most certainly is!
Some slow but chunky chugging guitars, bass and percussion get things going on Flowers in your hair with Travis's warm vocal soon joined by piano and some nice harmonies on a lovely country love song that includes steel guitar and mandolin. That metronomic chugging style is mirrored on Finding my way, with bass, melodic twangy guitar and steel guitar supplying just the right support for Travis's warm vocal. The song is a just below mid tempo ballad that includes some nice restrained harmonies on a beautifully arranged composition that eventually has the addition of keyboards on another tale that has a strong country feel. Bar room is a slower song, again with the deep twang and steel guitar to the fore with the usual solid percussion and throbbing bass. Travis provides yet another excellent vocal with some sympathetic harmonies on a classic song about the drowning of sorrows, with a nice piano break adding to the atmosphere. Finally, Going down easy is an easy going, shuffling late night jazzy ballad with an excellent guitar and keyboard sound aided by some tremendous percussion and bass and further highlighted by an excellent vocal from Travis that shows his versatility. It is a little unusual in the context of the album but a quite addictive song that perfectly suits his manipulative character laden vocal style.
'Up ahead' is an album built on excellent songs, very few of which reach more than a sedate  mid tempo and yet the recording loses nothing for this thanks to Travis's lovely warm vocal style, beautiful arrangements, outstanding melodies and tremendous playing. That, in a nutshell, sums up this album that is driven by Travis's own natural style that includes a large helping of 'country' without him actually being driven by an adherence to it's often narrow confines! An excellent album by a talented, highly individual singer, songwriter, who should be defined by his all round talents rather than just those two rather limiting words!