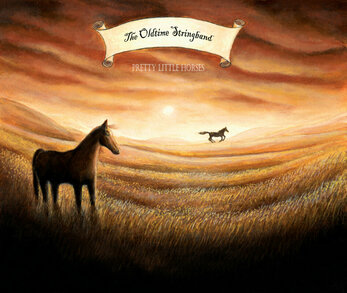 This tremendous album clocks in at less than half an hour and only eight songs and yet it contains everything the discerning lover of 'real country music' could wish for, except of course, longevity! Despite the shortness it is an album that repays the use of the 'repeat' button on your c.d player or any other format you choose to use.
This is the five piece band's fourth album and if anything ups the quality over the excellence of the previous three. Their consistency would beggar belief if they were an American 'hillbilly' band from the rural Appalachians but when you consider the sole American is Shelly O' Day and the four remaining members made up of three Dutch men and one woman, plus the fact they are based in the Netherlands, well; it more than beggars belief! The lineup has changed little over the years since the bands inception, with U.S native Shelly O'Day on vocals, guitar, autoharp and Cajun-triangle, Ton Knol plays guitar, mandolin and vocals, Ruud Spil, banjo and vocals, Nico Druijf on upright bass, vocals and singing saw, with the only change to their previous album, 'Cat's got the measles' lineup being the addition of Lidewij de Vries on fiddle and vocals. Lidewij has been a member for two and a half years and provided lead vocals on Your baby ain't sweet like mine' as well as designing the album cover artwork."The album was recorded 'live in the round' by Tim Knol at the Mi5 Studios in Hoorn, Netherlands.
The playing is always excellent but perhaps more importantly all five members of the band have a natural affinity and great depth of feeling for the music they play, enabling them to perform as authentically as any American band. Strange when you consider they only came together by chance, the details of which can be found in an earlier review or on their website. Perhaps, as I've said before, that powerful authenticity comes about because much of the music these songs are descended from came originally from Europe anyway so to hear such quality from a predominately mainland European band is maybe not as strange as we might have thought.
None of the edges are taken off by a sugary production; everything is natural and the reliance is on the skill of the musicians rather than any studio trickery, something that would benefit much of the music that inhabits the commercial charts of today. Of course it wouldn't work without that degree of skill but also of absolutely vital importance is the feel that this band has for the music.
Things get underway with a powerful rendition of the old time classic Cluck ol' hen, the banjo, fiddle and guitar driving things along, with a hugely evocative vocal from Shelly O' Day. All the pretty little horses opens with just Shelly's unaccompanied vocal before the mandolin and banjo come in with the bass giving this excellent song the eerie spookiness so essential in getting the best out of it. As the fiddle works its way in, the atmosphere deepens to an almost otherworldly spookiness that few if any other bands could create so naturally. An easy going banjo and guitar get Your baby ain't sweet like mine started before Lidewij de Vries lovely, evocative vocal comes in aided by some gorgeous harmonies on the chorus, emphasizing the 'old timeyness' of the song, with the fiddle working its way in and out of the song as things progress. Last but certainly not least is a tremendous version of the Long black veil. The gentle banjo and fiddle back the male/female duet vocals on this appropriately mournful version of a classic song, with occasional mandolin adding little rays of light to the deep gloom. Everything is played and sung at a funereal pace, creating a depth of atmosphere that few others who have recorded this song have been able to match.
This talented band bring a powerful sense of individuality to these great old songs and whilst they may not be reinventing the wheel they have so much talent that they bring a welcome 'freshness' and no little authenticity to these old musical forms. Go out and buy it (or stay in and do so online!); you won't regret it.