Lincoln Durham - The Shovel vs The Howling Bones 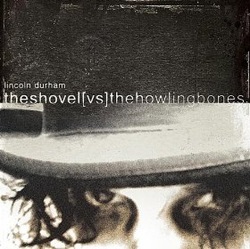 Rather than being his debut album you could be forgiven for thinking that Lincoln Durham was well advanced into a career as a successful blues singer/songwriter/guitarist, such is his quality and overall feel for the blues. There is a big powerful sound to the album, despite being sparsely populated on most tracks by just him, his guitar and Rick Richards on drums. Part of that sound comes courtesy of co producers George Reiff  and Ray Wylie Hubbard, (who has also served time as Durhams mentor)  who have not been tempted to try adding any colour to these well written songs that are all penned by Durham himself. If he played this music in a full band format he could well get lost in the pack  of blues bands, but this way the power of his guitar playing, his vocals and the strength of his songs are given space to breath and develop the strong individuality that he obviously has. His rasping arid vocals on these deep dark blues songs are as authentic as can be imagined and in many ways are not dissimilar to someone such as Paul Rogers but with a lot more natural bluesiness. He is a native Texan and is currently living in Austin, a real hotbed for the various strands of roots music.
I doubt very much that he has lived the life that is evoked by these generally deep dark blues; at least, I hope he hasn’t! It really is amazing how he ‘feels the blues.’ It’s easy to imagine that he has been travelling the roads of the southern states as an itinerant bluesman for the last decade and suddenly been let loose in the studio to record the dark side of the life he and one or two others have been living. Georgia Lee is a slow moody slide guitar driven swampy blues with a threatening intensity about a blueswoman who has lived a similar blues life and has much to teach him, being like ‘a springtime storm.’ Reckoning Lament is an excellent mid tempo electric slide guitar blues with keening harmonica that namechecks Fred McDowell and Robert Johnson and tells a highly evocative  story of an old bluesman. Clementine is a slow acoustic ‘leaving’ ballad with a twist. With vocals at times reminiscent of a young Rod Stewart, it is sung by a man already dead, to the love he left behind and is accompanied by atmospheric harmonica and piano. The album starts with the dark blues of Drifting wood a spooky resonator guitar driven song whose darkness sets the trend but is then followed by Last Red Dawn, which if possible descends into ever more deep darkness, tempered a little by the gorgeous mandolin playing of Jeff Plankenhorn. The lyrics on album closer Truckers Love Song, make it easy to imagine what the life of a lonely trucker could be like and doesn’t lift the gloom but does at least indicate the man in the story has come to terms with what life has dealt him.
Ultimately, this is a dark but far from depressing album by someone who is on the fast track to becoming a master of his art. The lyrical themes are fairly typical of the ‘old deep dark blues’ but in a more modern setting. He is writing the songs from a 21st century persective rather than going back to the old time blues stories and deserves great credit for bringing these sparse raw blues up to date.