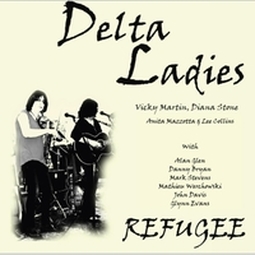 The Delta Ladies are the multi instrumentalist duo of Vicki Martin and Diana Stone who between them play guitar, ukulele, fiddle and guitar. This tremendous album is also genuinely strange and unusual, performed by a band who by reputation are incredible live, apparently putting their recorded music in the shade! In that case seeing them live must be absolutely essential for all fans of dark gritty blues and country because this is an album of such amazing quality that next time they are in my area, I and no doubt many others will be there to bear witness to their quality. (Duke of Wellington, Shoreham on Sunday 17th May!)

They are London based and bring in however many friends they need to supplement their sound. That sound is always quite sparse on these excellent songs that are all band originals with the exception of an astonishing version of House of the Rising Sun, here titled Rising Sun, on which the percussion sounds like a tabla, an instrument that crops up regularly, adding to the strangeness! Even the two instrumentals, one unsurprisingly titled Paranoia are enveloped in an all pervading darkness and yet conversely there are some gorgeous almost uplifting melodies alongside the excellent playing, unusual arrangements and evocative vocals. All of this is incorporated in that hugely appealing deep dark edginess that puts them in a genre of one, whether promoted as country, gospel, blues or even old time British folk music! It’s no use saying I will keep returning to the album; it is so good it is an almost permanent fixture in my c.d player!