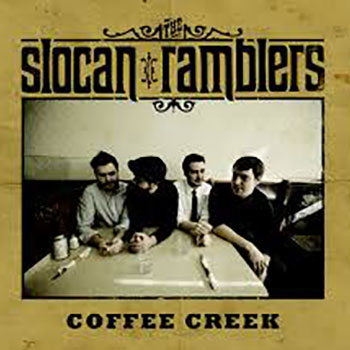 I think where this new album by The Slocan Ramblers differs from most 'bluegrass' recordings is that there is a strong folk element that adds more of an edginess to a music form that leans far enough away from the 'standard' bluegrass format to seperate them from the crowd, with a high percentage of their music being as much 'old timey' as any other style. They are known as a 'bluegrass' band but there is much more to them than just that one generic label. I've never been particularly attracted to 'mainstream bluegrass,' often feeling that some bands simply sing high and play as fast as they can with the upshot being that one can often sound just like another. Maybe that is an over simplification but that is often the way it makes me feel and despite this bands virtuosity, that certainly doesn't apply to them.
The songwriting covers band originals, as well as a couple of traditional songs plus others by artists such as Woody Guthrie and Roy Acuff. Four of five instrumentals were written by Adrian Gross, the other by Darryl Poulsen, whilst two of the songs were composed by Alastair Whitehead. So, quite a mixed bag, but the Slocan Ramblers put their own stamp on each and every one of the thirteen tracks with their virtuosic playing and their distinctive vocals, particularly the twangy edginess of Frank Evans, who handles most, but not all of the lead vocals as well as playing banjo and guitar. Adrian Gross plays mandolin, Darryl Poulsen is on guitar, vocals and harmonies with Alastair Whitehead on acoustic bass, banjo, lead and harmony vocals. There is a lovely flow to the album despite the diversity of material, something that further emphasises the quality of this incredibly tight unit. It is that diversity that allows them to play in their own individual style rather than simply adapting everything to suit generic bluegrass and the album is so much the better for that.
There are certainly occasions on the album when we are treated to instrumental solo's but they are within the context of the songs rather than being inserted to show the bands obvious virtuosity. The first track on this excellent album is Coffee Creek, a really good instrumental that goes a long way to exhibiting the bands playing talents with some tremendous playing from the lead instruments mandolin, guitar, banjo, fiddle and bass on a tune that has a folksy feel. Next up is the Woody Guthrie/Frank Evans pairing of Pastures Of Plenty/ Honey Babe. It has a high lonesome 'twangy' vocal accompanied by mandolin and starts as if a bluegrass song, but gradually takes on a different shape with the banjo alongside the mandolin, guitar and bass giving an edgy slightly sinister atmosphere. The song speeds up as it segues into the second part, even including an excellent acoustic guitar solo, all supported by some excellent harmonies as well. On Groundhog things get underway with the banjo and bass before the lead vocal comes in joined by harmonies and mandolin on a song that creates an old timey/hillbilly atmosphere. Similarly, Alastair Whitehead's Elk River, but this is a slow reflective 'hillbilly' song with excellent playing, lead vocal and harmonies. The usual instrumentation is played but with a different feel thanks to the slowness of the excellent song, Whitehead's excellent lead vocal and those evocative harmonies. Finally, the traditional Rambling Sailor, gets going with a mandolin and vocal intro before being joined by guitar on a song that has a powerfully 'British' folksy feel on a strong traditional tale on which even  Frank Evans seems to have a, barely detectable admittedly, British inflection to his vocal performance! Perhaps it is just the powerful effect of this old folk song on someone who genuinely has a strong feel for the music.
This is only The Slocan Ramblers second album but is does build on the promise shown on their debut, the excellent 'Shaking down the acorns.' Until their third album is released it is difficult to tell if that promise has been completely fulfilled but if it has they are worthy of the success that this album could and should bring them.