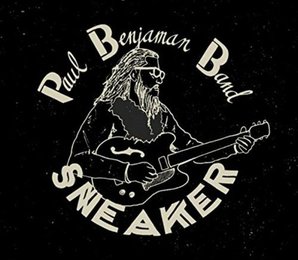 The Paul Benjaman Band bring a nicely diverse update to the laid back, chunky, easy rolling 'Tulsa sound' so perfectly formed by the likes of the late great J.J. Cale, Leon Russell and Elvin Bishop amongst many others. They have a sound that will soon be recognized as uniquely their own, although at least some of their influences are obvious, with their developing style being full of a deep swampy rock sensibility that also includes country, blues and a swinging jazziness that is powerfully funky. All of this is dominated by Benjaman's laid back vocal style and his excellent guitar sound, albeit one that allows the remainder of his band more than adequate space to express themselves. In many ways Paul Benjaman's strongest similarity is with J.J. Cale but overall he and his band have developed their sound into other areas, ensuring those similarities are put on the back burner, allowing the listener to become fully immersed in the bands highly original musical style.
The above mentioned influences change from song to song even though one song flows smoothly into the next and whilst on one song you may detect a jazziness; next time you play it something else is revealed. It really is an album that changes and exhibits further traits with every listening session, which in my case equates to a very large number!
This talented five piece band consists of Paul Benjaman on lead vocals and guitar, Jesse Aycock, steel guitar and guitar, Jeff Newsome on electric piano; Andrew Bones plays Drums and Bo Hallford, electric bass. Whilst Paul's vocal style has a relaxed feel there is also a sometimes intense bluesiness, allied to elements of country and thanks to the clean production and arrangement of instruments there is even an occasional Steely Dan feel! So there is plenty of diversity in stylistic leanings but simmering away and underpinning everything there is always that powerful 'chugging' Tulsa sound. Often that sound can be a little tiring but thanks to the varied arrangements throughout this recording that is never the case here. The tempos of the twelve songs don't vary much but thanks to those excellent arrangements it makes the whole thing quite addictive, in fact almost mesmerising at times.
Chunky guitars open the first track Sneaker with Paul's vocal coming in on a slow chugging bluesy tale with a vocal not dissimilar to the late JJ. There is a nice thudding percussion and deep propulsive bass, with excellent slashing guitar solo and the heavy sound contrasting beautifully with the laid back vocal. A gorgeous steel guitar and tuneful acoustic guitar propelled by excellent percussion drive Auburn Plaid a tremendous 'country' song with Paul's evocative vocal enhanced by the harmonies on this beautiful mellow ballad. Thudding percussion and bass form a foundation for the twin lead guitars to enhance the sound of each other on Your Music with the vocal providing the 'chugging' element on a song that is funky, bluesy and evocative of Steely Dan if they had decided on rawness rather than polish. (at least it was a polish that appealed!) This song in particular often has an improvisational feel, again something that helps give the band their individuality. Ringside opens with a light chugging guitar sound before being joined by a dirtier deeper swampy feel leading to Paul's excellent vocal on a song that has the classic Tulsa sensibility. On Monticello Honeymoon there is another lovely steel guitar alongside melodic electric guitar on a reflective song that has an easy going country feel. The variety of guitar sounds adds diversity and more power to a tale on which the individual guitars take front stage before segueing into the background. Finally, Black magic Country has a real laid back John Lee Hooker 'boogie' feeling that chugs along beautifully but at the same time has an incredibly powerful intensity on a deep swampy blues song!
So much of this recording harks back to the 'funky' days of the 1970s, almost as much as the blues and country elements that are the foundation on which much of the Tulsa sound is constructed. It is that funkiness that gives the musical blend its uniqueness, but to that you have to add a swampy element that gives the Paul Benjaman Band their powerful originality. Fans of other Tulsa artists will recognize the stylistic links and anyone who is a fan of J.J. Cale will almost certainly love this excellent sophomore album. Conversely, I suspect that many Steely Dan fans will also get huge pleasure from this recording. I certainly have and still am.