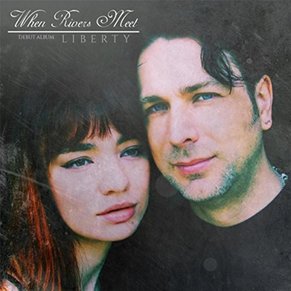 Stylistically my first impression of When Rivers Meet's debut album 'Liberty' was that it had the makings of a very good modern folk album. Gradually as I got deeper into the early listening sessions it began to strike me that their approach differed hugely to most folk singer songwriters until it started to dawn that much of their approach has a deep 'Americana' feel, with some songs, even if they are not dark lyrically, creating a deep dark atmosphere. Much of that is a result of Grace Bond's beautiful haunting vocals on songs that are never over arranged, in fact in the main, quite sparse and with husband Aaron supplying some excellent harmonies, as well as occasional lead vocals, as a counter to her expressive beauty. It now strikes me that my first impression that they are a 'folk duo' is very far from the truth. There is a folksiness in their style, but there is also an unusual country take as evidenced by their exquisite version of the late great Johnny Cash's Ring of Fire. They even plunge into some deep blues albeit a blues that incorporates a jazzy flavour, of which, more later, in fact they seem to have absorbed many different styles, the upshot being that this entire album is stylistically unlike anyone else that I can think of, likewise any genre I can think of if it comes to that!
This talented British husband and wife duo is the already mentioned Grace Bond who takes most lead vocals, fiddle and mandolin with husband Aaron Bond also on vocals as well as guitar. Eight of the eleven songs were written by the pair with the other three compositions being June Carter and Merle Kilgore's classic Ring of fire, Fingertips by Roy Villanis and Mark James's Suspicious minds, at least two of those songs showing their musical bravery by taking on such well known classics, although that is not a problem. Their treatment is so different and has such a strong originality of arrangement that the songs worked superbly.
I've seen 'When Rivers Meet' compared to the duo 'Civil Wars,' a comparison I don't really get. Other than the fact that both are duo's the latter's music has always struck me as being pleasant enough although I don't really feel that the depth of the songs and performances match up to those on this excellent album. Certainly the vocal sounds that Grace creates are beautiful but the depth, range and even a haunting eeriness are what set the duo apart and above just about any other duo playing in a similar generic field. With Aaron's vocals varying from a warm sympathetic counter to Grace's voice to a hard expressive quality that enables him to provide a high degree of dynamism and variety. When you put the two together it is pretty much 'a match made in heaven.' Generally there is so much restraint in the playing that the sound often appears to be far more sparse than it actually is and whilst the tempo's vary little, big changes aren't necessary on a recording that has such depth and variety, both texturally and sonically.
It takes some getting used to but the already mentioned album opener Ring of fire is a dark funereal version of a song that is incredibly well known so must really have taken some concentration (and nerve!) to record. There is a complete change of atmosphere and arrangement, this couple giving it a deep dark treatment with its sparse instrumentation of mandolin, violin and acoustic guitar allowing the spookiness to prevail. There is a shuffling percussion with a speedy electric guitar on Regrets and lies a song that has a 'rockabilly' beat and Aaron on lead vocal. Whilst the rockabilly comparison does hold good there is so much more to this exceptional song that has a deep yet mellow darkness, with a throbbing bass coming in latterly. The instrumentation changes are difficult to keep up with although to be honest there is very little instrumentation, it is just a fairly complex, if hugely rewarding song that I've been playing over and over, with the beat being so repetitive it is virtually an addiction! Postpone is a much more upbeat, up tempo song with the sprightly fiddle, percussion and chiming mandolin providing a nice full sound to accompany Grace's lead and Aarons harmony vocals. It is a composition that has a strong folksy feel, although that 'folksiness' is certainly not as restrictive as some generic stylings seem to be and there is an openness that expands the sound, depth and spaciness of the song. Finally, on Can't pay my way the mix of brass and deep chiming guitar with percussion gives the song an almost (Tom) 'Waitsian' atmosphere on a composition that has a nice blend of styles, with brass entering the fray and creating an old New Orleans jazziness with the trombone, clarinet and sax often working against each other. The two vocalists work the song as a harmonic duet which roots the sound and allows the remainder of the instrumentation to roam free!
I've already said that the duo are difficult to pigeon hole but it is gradually becoming apparent that they bring their own unique style to any song, regardless of its 'roots.' My feeling is that if they start to load their direction more towards the folk elements their uniqueness will start to dissipate but if they keep aiming in the direction that this album points, which certainly contains folk, but also jazz, country, blues and myriad other styles they will get the success that they are working towards and that this tremendous album more than hints at!