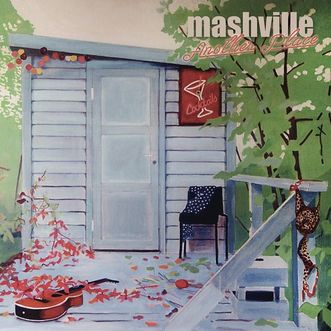 Mashville is a talented folk, roots and sometimes alt. country band that hails from Kent, England. This excellent recording is their third album release, their previous disc, 2015s 'Tripping on wires' having been favourably reviewed on this site. The lineup differs from the previous album although the mainstays Graham Loft and Berin Riley, who also write all of the songs, are still there with, on this album, Steve Heath on bass guitar, Erirk Skaar on drums and percussion, with piano, keyboards and accordion being the territory of Lyndon Kjepso Riley, who also produced the album and Ben Knudsen on harmonica with backing vocals courtesy of Jennifer Maslin.
As a non musician I can scarcely imagine how difficult it must be to write and record an album, but to write and record an album that is quite sparse and mellow and generates a laid back atmosphere whilst still having a strong dynamism almost beggars belief. Of course, in achieving that feel the strong dynamism is an absolutely essential feature otherwise you can be left with a recording that simply becomes 'easy listening' fodder or worse still 'elevator music! You know the sort I mean, albums that can be listened to however many times without ever leaving any sort of impression other than a bland soporific effect and it's fortunate that there are a few bands such as Mashville who are able to achieve that dynamism seemingly at will. This excellent new recording from the talented Kent based band reminds me in some ways of Chris Rea in his heyday when he was able to generate drama whilst still seeming laid back, similarly The Blue Nile, that great 'late night listening' Scottish band who may or may not still exist. Mashville are musically entirely different to both but the principle and skills required and at their disposal are the same.
All nine of the songs on the album are beautifully arranged and produced, similarly the playing and vocals, and the overall sound has a big spacy, almost arid feel that helps create an epic quality, whilst whatever instrumentation is used on each track the lead vocal and harmonies are always allowed plenty of room to breathe. Although it is not universal throughout the album, generally the signature feature is the tone and lovely melodicism of the lead guitars and on a few occasions the piano. The percussion and bass provide rock solid foundations, whilst the steel guitar weaves its way in and out of some of the songs, with occasional harmonica adding to the spacy yet dramatic quality. The subtle taste of other instruments provide a little extra colour in support of Graham Lofts evocative vocals that pull everything together.
On album opener This song a gentle acoustic guitar and organ get things underway, soon joined by a melodic electric guitar and fiddle before Graham Lofts spacy lead vocal  comes in on a slow moody ballad. The dynamic percussion eventually solidifies the depth and power of a song that has a lovely mellow feel and consequently never resorts to any histrionics, instead allowing the song to stand or fall on its own merits. It stands! The accordion and electric guitar plus thudding drums and bass introduce The gift, another excellent song, this one on which Graham Lofts vocal is restrained, creating a late night atmosphere, enhanced by gentle melodic guitar on a song that, to me at least, is reminiscent of 'Blue Nile.' The varied keyboard treatments and Jennifer Maslin's haunting harmonies add to the effect with fiddle eventually creating a haunted element along with a beautifully melodic guitar solo. A gentle piano intro is soon joined by bass and lead vocal on Oradour, another excellent ballad that includes solid percussion and bass rooting everything whilst the melodic lead guitar meanders its way through the song. Latterly the fiddle comes in with the blend of instruments lifting the song and creating an almost epic cinematic quality. Finally, Signs and bloody wonders has a gentle guitar and haunting 'high lonesome' harmonica intro that is joined by lead vocal and tuneful electric guitar before percussion and bass comes in to root the sound on a haunting tale made more so by the lovely haunting female harmonies. Latterly the guitar changes tone as the song gradually takes on a deeper and perhaps darker perspective with another excellent, melodic guitar solo; not overdone or speedy but emphasizing the melodicism of yet another excellent song.
With this being Mashville's third album their consistently high quality is confirmed, always assuming it actually needed to be! It is difficult to really compare them to anyone else that I can think of or indeed slot them into a particular generic style, meaning that, certainly in my world, they are pretty much unique. Add that strong individuality to their undoubted musical talents and I can't imagine, given a little promotion that it will be long before the wider music buying public are ignoring 'manufactured' bands and concentrating instead on 'real musicians' who genuinely have something to say musically. Mashville will be a very good starting point.