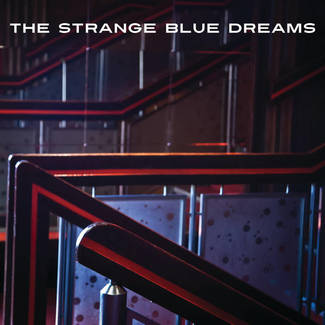 As someone who always tries to come up with a few comparisons that will hopefully give potential listeners at least a vague idea of what to expect from a recording, The Strange Blue Dreams have me completely stumped. I'm guessing that I've listened to this debut album at least a couple of dozen times so far and not only can I still not come up with comparisons but in listening to it again now I don't even know which song follows which. If I tell you the various genres that come to mind I don't think that will help much either. There is certainly surf music, a little Hawaiian, 1950s pop and rock 'n' roll, country, a little old timey, perhaps at times elements of jazz, maybe some eastern European gypsy jazz, a friend even mentioned Vaudeville; I think I just heard some doo wop, maybe even a hint of mariachi and I'm sure by now you're getting the picture, although I don't think anyone will ever get the full picture of this extraordinary Glaswegian band! That's right, Glaswegian; not New Orleans or countless other American locations where so many different 'American roots' music off shoots are distilled, but Glasgow, Scotland! Nothing unusual about original and talented musicians hailing from the northern reaches of our 'fair and pleasant isle' but I don't detect too much 'Britishness' in this bands music, incredible though it is.
This is the talented five piece band's debut album and whilst one album hardly cements a place in the upper reaches of top notch roots music bands, from what I've read about their live performances and the sheer quality and uniqueness of this incredible eleven song recording I can't see 'failure' as an option. The makeup of the band consists of David Addison on lead vocals and guitar, Ross Wilson, drums, Duncan Kennedy on guitar, David Rae, mandolin and vocals and Richard Anderson on double bass and vocals, all being experienced musicians who know their way around the recording studio having worked on a number of other projects over the years. The songs were all written by David Addison although on Jungle drums he worked with Duncan Kennedy and on Twilight zone and (That's the place) I'm falling he worked with A. Smith
Even after numerous listening sessions this album has still not become predictable, such is the unusual sound they have achieved and every song reveals more with every listen despite the fact that the instrumentation is never over done or dense. It is just that the stylistic build up of the songs is like no one else's and has such appealing warmth in the vocals and incredible strong melodies. The only artists that come to mind when listening to this album is Petunia and the Vipers but that is due to the experimentation that leads to so many variations, the excellent and unusual lead vocals and the overall otherworldliness, although having said that, even Petunia and co. sound more contemporary than this extraordinary collective.
The album opens with Electricity and includes grungy, as well as twangy guitars deep in the mix, thumping percussion, early 1960s girl group harmonies and a strange otherworldly atmosphere, but don't think this song will set the scene for what follows because nothing can! It's difficult to imagine a more 'twangy' introduction to a composition than the guitar on Reverberatin' love a song that also includes in the mix a quite spooky guitar sound. The feminine harmonies are similar to the preceding song, with an excellent lead vocal from David Addison that is almost a throwback to the 'smoothness' of late 1950s or early 60s, with a virtual 'surf guitar' solo with a mandolin! A mandolin lead plus handclaps, thudding bass, an excellent lead vocal and the usual gorgeous harmonies propel The ballad of the sun and the moon, another song that is part spooky otherworldliness and part 1950s pop, country and much more but beautifully wrapped up in a quite addictive package. An unusual mandolin and guitar opening give Lyrebird an otherworldly introduction, then the lead vocal comes in with a warmth and melodicism that roots the song back here on earth, even including some 'doo wop' harmonies. As with many other sections of the album it has the feel of a Joe Meek production, although I doubt that even he had the imagination to construct such an unusual recording. Finally, Pretending everything is another excellent song that doesn't quite seem to be of this world. The vocals are, as usual, excellent as is the playing, with the throbbing bass, beautifully melodic guitar sound and the excellent harmonies. A relaxed percussion, bass and guitar break midway, that in other hands would create a contemporary atmosphere, still has that haunting edginess of an indeterminate time and genre.
I'm still trying to get to grips with the myriad styles and influences on this incredible recording but really, they don't matter. This band has come up with something so original and unique that whatever your taste in music I'm pretty sure you will find something on this album to suit. Many bands and artists lay claim to being entirely different to their 'peers;' this lot don't but they have no need to, because they just are!