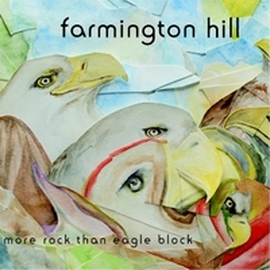 Right from first listen I was struck bythe fact  that this talented band is reminiscent of bands such as Uncle Tupelo and the Long Ryders, perhaps even Jason and the Scorchers! Not exactly bad bands to be compared to but if anything Farmington Hill have a slightly more dynamic and varied sound than the above and perhaps veer closer to rock than they do with a lovely natural edginess. On occasions I was even reminded of the Clash, maybe in respect of them having a strong punk edge but without actually being a punk band! If you want to slot them into a nice comfortable genre, forget it! There are so many influences and skills at play on this recording that includes alt country, rock and roll, cow punk, even a little heavy rock in its makeup, in some instances various generic strands being recognizable but most are blended into this rich all enveloping stew of powerful sounds. It would have been easy to categorize Farmington Hill as a 'guitars and drums' band but there is so much going on here with the powerful confident playing of all concerned on an album that includes  some tempo variations but also a recording on which the dynamic pace never lets up.
The songs are all written by the band, whose members are Paul 'Bubba' Ludice on acoustic guitar and vocals, Erik Nordstrom plays electric guitar and vocals, Kelly Rogers, lap steel and vocals, Mary Hess on bass and vocals with Logan Miller handling drums and percussion. They are based in Durango, Colorado and were put together by long time collaborators Paul Ludice and Erik Nordstrom. It is often the case that bass and percussion are looked upon merely as a foundation for the songs and other players to display their skills but listen to this recording and you will hear as powerful a bass and drum sound as can be found in roots music and one that not only lays incredibly solid foundations but adds to the fullness of sound. To that you have to add Paul Ludice's excellent vocals that are as able to display warmth as they are a fiery passion, whilst Erik Lundstrom's command of the Telecaster has to be heard to be believed and just when you think a little extra colour would spice things up, in comes the sparingly used steel guitar of Kelly Rogers lap steel.
The reason the band is so good and stands out from the pack is that there appears to be nothing contrived stylistically. The atmosphere they create is one of a band of friends who got together to play the music they love and they seem to work incredibly well together with the beautifully blended harmonies and plenty of attack and dynamism in the arrangements. The lead and harmony vocals are always excellent, the arrangements perfect for purpose and the playing full of fire and passion. And yet, even on the songs that rock powerfully there are some memorable melodies that stay with the listener long after the albums end. I've often criticized albums for having a too full, dense sound but on this recording a certain density is absolutely essential to enhance the power, something the band gets just right.
Things get underway with speedy fiery guitars on Things are gonna go my way, an excellent rocker that would probably fit best under the heading 'cow punk.' The lead vocal is strong, the harmonies excellent and the attack is full of drive and passion. Rats is performed at a slightly slower tempo but is just as dynamic as everything else on this tremendous album of powerful sounds with the fiery vocals and lead guitar sound alongside the  thudding percussion and driving bass giving them an incredibly full sound. That is followed by Crazy Mary a song that has a slashing, crashing guitar sound with the thudding bass and percussion driving excellent lead and harmony vocals at just below mid tempo. The full sound belies the fact that there are only five people in the band on this paean to Crazy Mary. Along with everything else what lifts them above their peers is the sheer dynamic attack on this and every other song on an album that is on almost constant play in my house! Break is a little slower than its predecessors with a much cleaner guitar sound, courtesy of the steel guitar, with another tremendous atmospheric lead vocal and harmonies with the ubiquitous dynamism of the bass and percussion underpinning everything. On first listen to She wears her makeup to bed I was reminded of the Clash's Should I stay or should I go but the differences outweigh the similarities, although that comparison still nags at me on yet another excellent song. Final mention goes to The finish line, with telecaster to the fore and a less full sound on another tremendous song that has a lovely chugging feel and a tremendous melody to set alongside the huge quality of the rest of the songs.
There may be many bands that play music in a similar vein to Farmington Hill but they are most certainly one of the best around, as evidenced by not only this tremendous recording but also by their debut 'Bridge to nowhere.' To balance the praise i'm trying to find a reason for them not to succeed. Don't hold your breath whilst you wait; I could be some time!