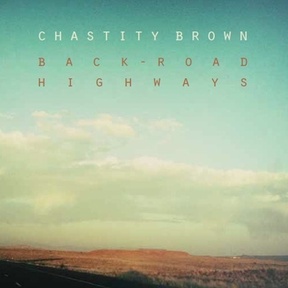 
This is the first album by Chastity Brown that I’ve heard but on the strength of this hugely atmospheric recording I will be investigating her three previous releases as soon as possible. This tremendous album blends deep rural blues with a powerful soul element, a little country, gospel and even occasionally a distinct but understated jazziness! She also has one of the most
atmospheric voices around, added to the fact that she is a multi talented instrumentalist, being not only an exceptional guitar and banjo player but also saxophone and piano. Add all this together and she really shouldn’t go wrong.
The album is so good, and unusual, that it could conceivably reach ‘classic’ status because of it’s generic wanderings, almost as if she has so much talent to burn that she can’t help but change between perhaps blues, country, soul, gospel and jazz influences, often within the space of one song, but without ever coming to rest in a definable genre. Having said that, the album is far more than just a mish mash of styles, in fact in many ways she has a unique and quite original if indeterminate style of her own.
The album was recorded, produced and mixed by Paul Buono in Nashville, Tennessee, with all of the songs being written by Chastity, except the album opener House Been Burnin’ which was a co write with Buono. Chastity takes all lead vocals as well as playing guitars, piano, banjo and harmonica, Robert Mulrennan plays electric guitars and handles some of the backing vocals, Paul Buono is on bass, guitars and backing vocals, Blair Masters, B3 and piano and Bernard Bell on drums. Chastity’s vocals are warm and expressive but with a hugely atmospheric rawness that gives a deep delta bluesiness to much of what she sings, whilst there is plenty of soulful power when it is called upon by any variation in the songs.
Album opener, the already mentioned House Been Burnin’ is a quite stunning deep delta blues but always with a matchless, incredibly soulful feel. It is eerily dark and raw with her tremendous vocals giving a depth to the atmosphere that is totally believable and authentic. When We Get There is a song of indeterminate style other than the catchall ‘roots’ and includes organ, drums, bass, chiming guitar and harmonica with her gorgeous vocal having
a raw blues feeling that veers towards soul on a song that even has vague echoes of country and jazz. After You is a tremendous song that has a full funky beat that is at times almost mesmerizing thanks to the chanting and an overall atmosphere that could have been created in South Africa with the walking bass line and what could almost be termed hi-life guitars, with atmosphere further added to by the inclusion of a banjo! Quite a spectacular song. Could’ve Been A Sunday has an unusual arrangement on a song that has a slightly sinister air of mystery to it with the eerie religious connotations, grounded by the keyboard sound but allowed to soar with a haunting echoing guitar. The album closer If You Let Me is a tremendous slow moody song driven by keyboards and with a powerful gospel feel and Chastity’s soaring vocals rising above everything else. An ideal conclusion to a hugely enjoyable recording
I look forward to hearing a better album this year but suspect there will be very few of those. It will almost certainly take it’s place as best blues album of the year for many people(released in the U.S last year and U.K this
year) despite the fact that there are echoes of so many other roots sub genres.  Great album!