LAURA REPO – GET YOURSELF HOME 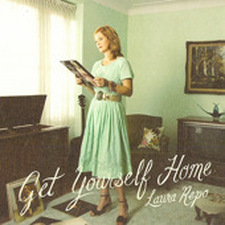 The first few times I listened to this album I was either doing something else in the house or was out in the car so was never really concentrating too much on the songs. First impression was that it was a really pleasant sounding album that seemed to consist of really  well played beautifully sung folksy country songs, but nothing more than this. On the downside the few bits and pieces of the lyrics that I was able to pick up on sounded a little, if not exactly twee, certainly a little lightweight. How wrong can you be? When I eventually sat down to really concentrate on the album it improved with each subsequent listen, to a point where I realised that despite the fact that in the wrong hands some of the songs would confirm the tweeness they are actually small vignettes taken in the main from the lives of Laura and those around her.
All involved in the making of this excellent album, but particularly Laura  and producer Andrew Collins deserve immense credit for avoiding the ‘twee’ trap by quite a considerable distance. Collins is also a member of top Canadian bluegrass band ‘The Foggy Hogtown Boys,’ whose other members also add their considerable skills to the recording of this lovely folksy country album. The playing is exceptional from start to finish and the instrumentation, whilst much of it being standard for the genre, shows a lot of originality in the way it is used, never sounding derivative of anything else within the genre. Laura’s gorgeous vocals seem a little reminiscent of singer songwriters such as Carrie Rodriguez and Gillian Welch with that  lovely twangy rootsiness that has such an authentic feel, and yet she is still different enough to pretty much stand alone stylistically.
The stories she tells in her songs though are entirely different, being very family and consequently ‘small picture’ oriented, but are at least as worthy of your time as anything by the aforementioned pair of women! Of the twelve songs ten are Laura originals, the two not written by her being a tremendous version of Jean Ritchie’s The L & N Don’t Stop Here Anymore, and the other is the heartrending Annie’s Wedding Dress, a quite beautiful sad song of a doomed love written by her Great Aunt, Helen Wilson. All of Laura’s own songs are small realistic snippets from life that most will be able to relate to, particularly parents of young children! They are given an added power by Laura’s discernible commitment to them and the attitude and edginess that she seems able to change at will to suit each songs requirements. The first two songs on the disc, Lullabies of the Land and Sleepy baby are easy to relate to by any parent, with the former being a gentle tale of familial love and the latter with it’s sparse harmonica and drum beat being a tale of sleepless nights courtesy of a small child! Everything is Everywhere can be put into the same category by the parents or grandparents of young children, telling of the beauty and chaos in equal measures! There is a beautiful chiming guitar on A Three Inch Stack of Photographs a song that relives lifes ups and downs through photos, whilst Pretty Shoes contains some lovelyatmospheric banjo and chiming guitar on a song about finding solace in some retail therapy after a love gone bad! Montreal is given a classic hillbilly start with echoing banjo, mournful fiddle and edgy harmonies on a song about travelling from the countryside to the city and it’s contrasts, again given an edge by her attitude and instrumentation, heightened in a strange way by namechecking the city.
Every song on the album seems to engender sympathy for and understanding of what the storyteller is trying to relate. None of them particularly try to be an all-encompassing ‘big picture’ but when the component parts of this excellent recording are added together it gives an insight into the triumphs and travails of ordinary lives, lifted above the ordinary by beautiful writing, playing and instrumentation and by some beautifully interpretive vocals.
A lovely album that despite the simplicity of much of the subject matter, has plenty of edginess that enhances the character and deserves to be heard by a much wider audience.