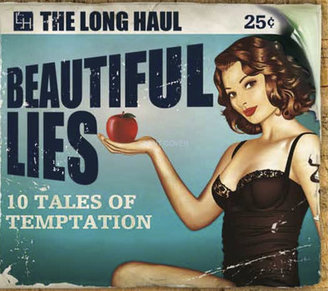 The Long Haul are a Brighton U.K country band who I have yet to see perform in a live setting although judging by the quality of their Youtube videos and this excellent album I'm hoping to rectify that before i'm too much older. They are a five piece band that consists of Simon Sparrow on lead vocals and acoustic guitar, Scott Warman, double bass and vocals, Dil Davies on drums, Francois DeVille, pedal steel guitar, acoustic guitar and backing vocals and   Duncan James plays lead guitar on this album on which seven of the songs were written by Simon Sparrow with the other three from the pen of Francois DeVille. Most of the songs are rooted in (and out) of aspects of love but the stories have more depth and twists than those that many writers seem able to come up with and in most cases have the listener rooting for our hero.
The album was recorded partly in the Long Haul's base (and my original home city) of Brighton and partly in Nashville U.S.A with production courtesy of Eamon McLoughlin. Eamon is a founder member of the Greencards, has received two Grammy nominations and along with his touring and studio work still finds time to be the staff fiddler at the 'Grand Ole Opry.' If you add to that the fact that whilst he is Nashville domiciled he is originally from London U.K, this really is an album that has its roots in the U.S and U.K. Apart from the above there were also contributions from Nashville stalwarts Lloyd Maines, Chris Scruggs and John Jarvis.
Sparrows vocals have a lovely clarity and warmth that blend beautifully with the tremendous playing by this talented band. Percussion and bass blend incredibly well allowing steel and lead guitars plenty of time and space to go off on their runs and because the album is not awash with an orchestrated string section it is possible to hear every instrument and lyric, something that is becoming less common in modern country music. It often seems that producers and record companies don't have the confidence in artists and vocalists to avoid making the productions awash with an instrumentation that drowns out any musical or lyrical nuance. That is certainly not a problem on this excellent recording.
And so to the songs! Psychic baby has some great electric guitar work underpinned by acoustic and restrained bass and percussion with fiddle darting in and out and a little restraint on the beautiful steel guitar on an excellent 'western swing' song. There is a tremendous lead guitar solo that gives way to the steel and fiddle on an excellent break on this song that even has a good story that has you rooting for the hero! The weeping steel guitar gets Waiting and wishing, a gorgeous slow ballad underway with the usual excellent bass and percussion and deep atmospheric twangy lead guitar solo. As with the other songs on the album the arrangement couldn't really be bettered; it is an incredibly musical album to which you have to add the beautifully conceived and written songs that are not only lyrically excellent but also have strong catchy melodies. On Beautiful lies there is a nice acoustic guitar start that is soon joined by Simon's vocal and closely followed by the weeping steel guitar, bass, percussion and melodic lead guitar with a nice mandolin joining the fray on a gorgeous lovelorn ballad. The harmonies are beautifully evocative and full with some excellent lead guitar and an appealing melody on this excellent choice for the album's title track. Blind is a gentle lost love song that gets underway with guitar and fiddle supporting Simons vocal with strong bass, restrained percussion and the ubiquitous weeping steel guitar, with a beautiful chiming electric guitar solo mid way. Finally, there is a  twangy, up tempo, upbeat start on Existential boogie, with hard driving bass, percussion and  'boogie' piano with an excellent vocal from Simon on a song that changes the slant of the album or at least adds yet more diversity to an already quite diverse 'country album.'
This really is a 'classic country music' album and with all that term entails. The instrumentation is what you would normally expect on a contemporary country album, as are the excellent arrangements, the superb playing, varied tempo's and top notch song writing, on the face of it making it seem simply an albeit, high quality, modern day album of country music. Nothing exceptional about that you might say. But, to that you have to add the fact that whilst it can only be described as country music there are so many variations to that style with some songs having more of a western swing sensibility, some excellent boogieing, beautiful country ballads, even a little 'funkiness,' which when added to everything else lifts this recording far above what I often unkindly (but accurately) refer to as Nashville fodder! I rarely listen to what on the face of it can be termed 'modern country music,' but with everything that is included in this recording I am more than happy to make an exception in the case of the talented 'Long Haul.'