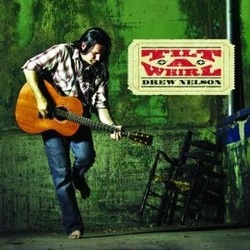 This is Drew Nelson’s third studio album of character driven story songs and is probably his best yet, although the first two, ‘Immigrant Son’ and ‘Dusty Road to Beulah Land’ were pretty outstanding. Many of the musicians that write in a similar vein are often classed as folk artists, a title that is far too restrictive for the scope and variety in Drew Nelson’s music. He is very much in a sub genre that is able to blend a slow to mid tempo rootsy rock with a strong country feeling thanks to his superbly emotive story telling. He is also blessed with excellent, expressive vocals, with several people I’ve played this album to thinking they were listening to a countrified Bruce Springsteen. Certainly there are similarities although as well as the different take on roots music Drew Nelsons vocals are generally much warmer than Springsteens.
Drew is a singer songwriter who tells some incredibly detailed and powerful stories, some of them really gritty in their subject matter. Several of the songs are actually quite anthemic thanks in part to Michael Crittenden’s excellent production that enhances the haunting elements in the songs without ever using too many instruments. There can’t be many better storytellers in roots music than Drew, who with a little help on several of the songs, at least had a hand in writing all of them himself. The only slight reservation is that of the several out and out love songs a couple of them are verging on being perhaps a little too sweet. Maybe this is simply a reaction to the power of some of the others stories of hard lives, then suddenly being confronted by tales of love, although thanks to that production again, they do avoid falling into the pot of sugar!
As well as producing the album Michael Crittenden also plays B-3 organ, Wurlitzer, piano and guitars, Mark R. Schrock is on bass, mandolin and vocals, Brian Morrill  plays drums, Drew Howard, pedal steel and Dobro, Jen Sygit on vocals and Brett Lucas also on guitar, as is Drew. It’s difficult to envisage how this lineup could actually be
improved upon such is the quality and restraint they show on some consistently epic and mostly heartrending tales, although there are those few little glimmers of the heart being warmed!  Even on his less strong songs, they
still seem to, if not exactly draw you in, to at least have an evocative atmosphere that creates an emotional response in the listener. They are stories that whilst fundamentally fictitious, despite probably having a basis in real  characters, have a high degree of realism that ensures the listener can’t help but feel a real and at times quite deep sympathy for most of those characters. Fairly obviously sad songs have a greater impact on the listener than happy go lucky tales and this, whilst there are albums around at the moment that I like more, is still one of the best and well balanced albums I’ve heard for a very long time.
The album opens with Promised Land, a song that includes some terrific guitar solos on a universal tale
about the struggle to make ends meet and the indignities suffered by a veteran of the Iraqi war and probably a large percentage of the earths population. It is a really good scene setter that lets you know there are some exceptional stories to follow. Dust is a lovely slow moody country song with gorgeous steel guitar and some excellent lead guitar  playing that also includes dobro. It is another tremendous story that tells of a struggling family in the dust bowl years. It’s an incredibly sad, highly evocative tale that in many ways is made more real by that lack of a happy  ending. This is followed by St. Jude, another cracking story, this time a historical drama with some lovely female
harmonies and nice keyboard and guitar sounds about a man following his love to America in the civil war. an epic tale with an hauntingly epic sound! And this is how the album continues, with one notable tale after another. Copper is a strong story with a slightly sinister atmosphere thanks to some eerily discordant guitars, on a tale of someone unsure of his roots and place in the world, consequently giving him a feeling of cynicism towards the whole human race. My Girl (Shooting Star Wishes) is a nice mellow sounding ballad with treated guitars reminiscent of a Daniel Lanois production. It has a lovely haunting sound on an excellent warm love song that stops short of tweeness thanks in part to the powerful haunting instrumentation, as does What She Does, another nice mellow slow moody love ballad. This one doesn’t feel quite fully formed but does work reasonably well in it’s depiction of a deep love, giving the impression that one lifetime is not enough to contain the love he feels. If you analyse the sentiment, perhaps it’s not over sweet, but actually creates an honest impression of what many of us could feel if we gave ourselves a chance. Maybe food for thought for much of the human race!
There is very little about the album that is not outstanding, from the writing and vocals to the incredibly
well selected and played instrumentation and there are probably not too many albums in this difficult to define genre that you can say that about.  Anyone reading this just has to get a copy of this exemplary album and settle back and listen to some stories that really could and should be converted into epic films!