The two above photos by Joel Faurote 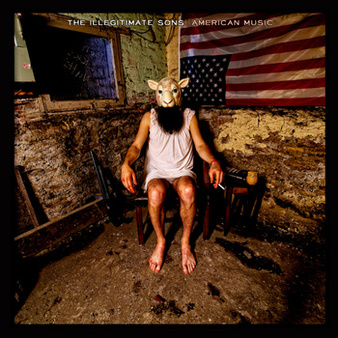 ‘The Illegitimate Sons play a brand of Americana, Alt-Country, and Murder Ballads reminiscent of The Band, Johnny Cash, Bob Dylan, Townes Van Zandt and Neil Young.’ These were the first words I read about this tremendous band and not only were they displayed on their website but more importantly, for once this huge hype of a new band is wholly accurate! Of course, what we don’t know is if they have the consistent
genius or longevity of the five aforementioned legends, but they have certainly produced a debut album that stands comparison with much that those five have come up with. That doesn’t mean that they are a copy of any of them but there are elements of all, whether stylistically, atmospherically or with the excellent choice and variety of instrumentation, tempo’s, song structure and generic fields. I’ve played this album countless times, but am still picking up on little nuances, previously unnoticed and must say that, unusually, I was knocked out by the huge quality from the very first listen!
The band is made up of  Lee Miles, who writes all of the song, sings lead vocals and plays guitar, banjo, piano and harmonica, Ben Porters on electric guitar and mandolin, Andy Pauquette, bass guitar, Kyle Morris, pedal steel guitar and backing vocals, Brett Gilpin, keyboards and backing vocals and finally John Ross on drums. There are several guest musicians including the gorgeous accordion tones provided by Bart Helms and the beautiful vocals of Sunny Taylor on a lovely duet with Lee Miles, of which more a little later. There is a poetic lyricism to Miles songwriting, much of it loosely wrapped in metaphor that after a few listens can be unravelled relatively easily. It takes just enough work to make the listener think and in doing so envelops you in the stories and the haunting sounds that when put together exhibit a considerable degree of originality. My review copy
of the album, as usual, provided no lyrics, but this tremendous band have had the foresight to provide the full album details including lyrics, on their website; something that really is necessary in this digital age of downloads.
The choice of instrumentation on each song is quite stunningly well thought out and couldn’t really be improved upon, whilst Miles’ vocals are as perfectly suited to ‘roots music’ as anyones have ever been. If this is an example of what the band is capable of and intends in the future they are up there with bands such as Son Volt, but with more variety to their sounds and textures.
It is unfair to highlight any of the songs (but I’m going to!) simply because they are all of an incredibly high quality, consisting of mid tempo country rockers and gorgeous ballads, all with
a dark lyrical content, so cleverly put together with the mood and tempo changes that it is never a depressing listen. Where you’ll hide from my blooded eye has elements of a rockabilly type shuffle but with steel guitar and edgy lead and harmony vocals giving the song an almost perfect feel. This is followed by Television Mama, a slow moody country rocker with gorgeous instrumentation that includes steel and accordion, which with the usual tuneful guitars and those edgy vocals evokes the very best of the Band and even at times Dylan, on a song full of reflections on life and love. Wholesaler is a simply stunning ballad with steel guitar, accordion, mandolin, acoustic guitar and hugely atmospheric vocals making it yet another album highlight. This is immediately followed by what could be the even better I want to die like Blaze Foley, a gorgeous, dark and hauntingly atmospheric tribute to the late great, singer songwriter, with the beautiful steel guitar providing a perfect counterpoint to the darkness. Album closer I’ll go where you go is a lovely duet with the hugely talented and hopefully soon to be much better known Sunny Taylor, whose vocals on this track have a similar feel to that of Carrie Rodriguez. The moody steel guitar, perky mandolin and
acoustic guitar give a sparseness to the song that perfectly suits the content, with the final notes from the steel closing an album that comes pretty close to being a perfect listening experience!
This may be an album that contains dark country songs about hard times, but the future for this brilliant band is all sweetness and light and hopefully full of good times!