RESONANT ROGUES - AUTUMN OF THE WORLD
​ 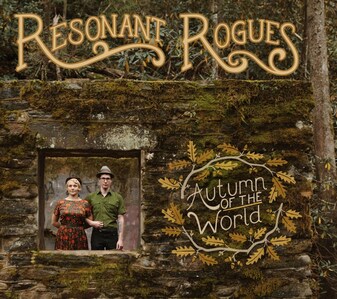 It's difficult to know exactly where to start when describing the music of the Resonant Rogues. I saw all three of their sets at this year's Maverick Festival; I know some may say that is overkill, but it still wasn't enough to be able to absorb the warmth of the unusual atmosphere their music creates, whether live or on record, so I saw them again three weeks later at the Beer and Bluegrass Festival in Poole, Dorset!
Free 'spiritedness' (is that a word?) is a phrase that is foremost in my mind whenever I think about their music and whilst they hail from Asheville, North Carolina I can never get the feeling from my mind that had I not known I would have been prepared to put money on their being from the New Orleans area. Even then any description is far from straightforward so an introduction to the band and their influences may help. The husband and wife team of Sparrow who plays accordion and banjo as well as vocals and Keith J. Smith on guitars and vocals were joined by Daisy Castro on fiddle and Daniel Iannucci who played double bass.
They tour regularly in a variety of countries, including Turkey, Australia, all over Europe, and the US but unlike many of their peers they study the local folk music and work those influences into their completely original and unique music. Obviously there is a strong rural American music influence at the root of their sound but you are just as likely to hear a song that has a recognizable Balkan accent, perhaps a little 'gypsy jazz,' even a middle eastern flavour, all pulled together by Sparrow's lovely, warm, easy going vocals that she seems able to manipulate to any style she chooses. Keith adds his excellent harmonies to the songs that Sparrow handles the lead on but also takes lead on some songs and whilst stylistically different is just as adept. Those harmonies that blend so perfectly also bring a different dimension in their creation of a unique sound and style. Added to their Resonant Rogues persona is the fact that they spread themselves into other music forms via a swing band, Sparrow and her Wingmen and a Balkan band, Black Sea Beat Society and there is more besides but I suggest you check them out on their web site 'Bios.' Whilst their music is defined by the vocals and experimentation with other folk music forms much of their individual signature is down to the accordion which is often used as the lead instrument, plus of course, the excellence and melodicism of their songwriting.
Of the twelve songs one is an instrumental, Zeus Faber, that the listener can be forgiven for thinking comes off an Eastern European 'folksy' album and of the eleven vocal tracks Sparrow takes lead on seven and Keith the other four with their harmonies beautifully blended. The accordion and Sparrows gorgeous dexterous vocal with background harmonies gets things going on album opener Makers song, with percussion joining in as the song gradually speeds up. The guitar and fiddle work their way in supported by metronomic bass on a song that has a hugely appealing melody. Both accordion and acoustic guitar take solo's adding yet more texture to a tremendous song that often takes on the feel of 'gypsy jazz,' perhaps more in terms of Sparrow's manipulative voice and accordion although it is also in the melody. On Tramp, the accordion, shuffling percussion and acoustic guitar starts the song creating a virtual Parisian pavement cafe atmosphere before Keith's excellent lead comes in with Sparrow adding beautiful harmonies, the combination of the two creating yet more depth and texture. Eventually the fiddle picks up the 'gypsy' feel ensuring yet another memorable song. There is a spooky intro with fiddle and accordion supported by percussion and bass plus guitar on Watching those wheels roll, with Keith on lead vocal on a tremendous song that is highlighted by the incredible tone of the harmonies with Sparrow and the accordion. There is a lovely fiddle break mid way creating a strange atmosphere on a song that is impossible to tie down stylistically other than to say it's a great song, despite at times creating a mournful edge. The banjo gets things started on Strength of water leading to Sparrows lovely vocal on a slow moody song that could be being performed on a front porch of an old lost 'holler.' The accordion gradually works its way in with the fiddle as do Keith's vocals and guitar, changing the location and atmosphere until Sparrows vocal takes over again with banjo before changing yet again and eventually just fiddle and banjo create their own atmosphere. Final mention is of Duelling with the demons, a song that has accordion, percussion, bass and trumpet in support of Sparrows often almost sultry jazzy vocal. Keith supplies the harmonies on a tale that, to me at least, has something of a New Orleans feel, and yet even that creates the wrong picture of another tremendous song but one that is fraught with difficulty when trying to tie it down stylistically.
Every song has a memorable melody, the arrangements and playing couldn't be bettered and the lead and harmony vocals rubber stamp the peerless quality and tie everything together. There is absolutely no filler on this brilliant set of recordings that whilst containing a variety of styles and influences from various parts of the world are all blended to perfection creating a completely unique album and style but one that is rooted in American music.