DAVID WADDELL - THE LAST OF THE OUTLAWS
​ 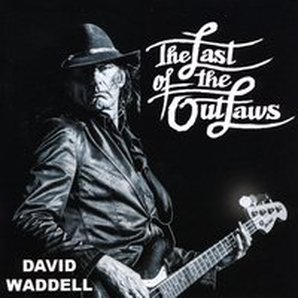 It would be easier to name the people David Waddell hasn't played with in his nearly five decade long musical career, but i'm not going to! If an artist of the calibre of Billy Joe Shaver refers to someone as 'One of the greatest songwriters and musicians I have ever known,' it is probably a good idea to investigate their work, something I have started to do with this tremendous and in many ways self explanatory titled album. 'Outlaw country' is a good description and whilst he is not quite the last outlaw standing, as he told me himself 'All of them except Willie and Billy Joe gone,' he sells himself short because there is a large overlap between those two greats and David's own original music.
It is worth mentioning here some of the artists David has played guitar with and for, written songs with and for, supplied harmony vocals for, toured with and produced! There is Billy Joe Shaver, Townes Van Zandt, J.J. Cale, Don Everly, Neil Young, Boz Scaggs, Blaze Foley and quite literally many, many more! He now lives in Southern Germany although this album was recorded in locations as diverse as his previous home Austin, Texas and Bern, Switzerland, as a consequence of which he used different lineups of backing musicians, something that created no loss in terms of album balance, probably due to the fact that the instrumentation varied a little on these quite rivetting story driven songs.
There are eleven songs on the album, although for some reason my review copy only has ten, but still enough to get a broad picture of what the album contains. All were written by David Waddell with the exception of High flying train which was a co-write between Billy Ray Reynolds and Royce Leland Waddell jr. Those songs are rooted in country but with numerous off shoots as well as a smattering of blues influences. There is honky tonk, trucker country, hard country, perhaps a little western swing, outlaw country, although don't run away with the idea that each of these off shoots are represented as a song form, it is more a question of detectable elements of each in songs, sometimes perhaps more than one sub genre to a song, in other words a stylistically unique mix of rootsy influences and blends. Every song has a strong melody and despite a hard edginess the album has a nice easy going flow as we roll along through these ten (or eleven) excellent songs.
David's voice has a deep, expressive style that includes a sometimes raw edginess but one that can change on another song to a smoother but no less expressive sound. The instrumentation and arrangements are beautifully worked out, always allowing the voice and the lyrics to dominate a series of excellent and stylistically varied tales that range from staright forward love songs to hard 1950s style tales of the outlaw lifestyle up to and including including murder! The melodic guitars, excellent percussion and thudding bass provide nice support on The game of love, a very good ballad that links love and gambling, some may say an excellent analogy, on a song that with perhaps a different treatment by 'Nashville' could cross over into the mainstream. Things dreams are made of is a slow moody ballad that includes haunting steel guitar, melodic twangy guitar and the usual excellent percussion and bass with David's deep expressive vocal style getting plenty of emotion out of a very good love song, again one that mainstream country could put to good (and profitable!) use. If you love a song that provides more than just an echo of the melodic old outlaw cowboy ballads you will not find a finer example than Tennessee/Mexico  with its  lovely accordion, steel guitar, metronomic percussion (that evokes the clip clop of horses hooves) on an excellent tale that has a lovely Tex Mex flavour. The song has a quite stunning instrumentation that would lift the song even without the excellent vocals and powerful lyrics. With them, it has, at least to me, become the best song on the album! Final song on this tremendous recording is Last of the outlaws, the composition from which the album takes its title. The evocative percussion and the excellent haunting dobro sound give the song a powerful edginess, with David's vocals portraying the characters in the song perfectly.
Having listened to this excellent album countless times it suddenly struck me (I do get there in the end) that this is very much an album that rarely gets made in this 21st century. Whilst there are nods to the modern era it is very much a product of the hey day of 'Outlaw country;' unsurprising really when you take into account David Waddells background and the people he worked with. The fact that this is such a good album is testament not only to his influences but also to his huge skills, great knowledge of the wide generic field and the fact that he has been as immersed in this music as his peers who are mentioned above. Sadly there seem to be less of those peers every year but David Waddell is more than capable of keeping things going until others have the ability to join him, Willie and Billy Joe!