WESTERN CENTURIES - WEIGHT OF THE WORLD 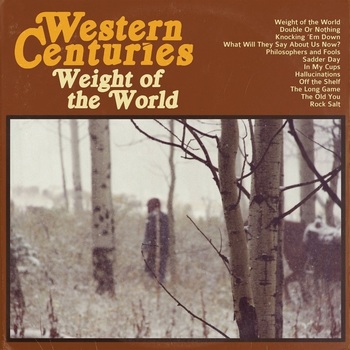 A 'honky tonk' album, made by three singer songwriters, none of them having more than a tenuous link to honky tonk is a recipe for musical disaster, or is it? It certainly could be but in this case Western Centuries succeed beautifully, always keeping that warm honky tonk sound, albeit on occasions bringing a more expansive experimentation. That is not an overwhelming feeling but it certainly adds to the development of what is now an old musical form.
The trio is made up of Ethan Lawton who started out in 'Hip Hop,' then punk before latching on to bluegrass and thanks to his love of jamaican music has a little of that in his phrasing whilst Jim Miller worked for many years in 'Jamband' territory as a founding member of Donna the Buffalo. Cahalen Morrison, of the three, is probably the most natural country musician, despite usually coming to it with a folksier leaning with duo partner Eli West, but he is most definitely a natural honky tonker.
Of the dozen excellent compositions, six were written by Cahalen Morrison, three by Ethan Lawton and  three by Jim Miller with the trio sharing production duties with Bill Reynolds and the recording was carried out in Nashville, TN. All three men play both acoustic and electric guitars, with Morrison also playing drums on several tracks whilst their sound is supplemented by Rusty Blake on pedal steel, Dan Lowinger, bass and Rosie Newton adding fiddle to most songs. It is probably that instrumentation, that is pretty much constant throughout but with variations in lead instruments and tempos, that draws the songs of these disparate musicians together as well as, of course, their love for honky tonk music. That love shines through with their feel for the music enhanced by their ability to stretch the established boundaries of honky tonk a little wider. With three different songwriters you get three entirely different approaches to composition, as you would expect, but the lyrical content is always excellent and whilst different the whole thing is cemented together by the beautifully arranged and produced instrumentation, despite the sometimes almost psychedelic otherworldly quality of some of those lyrics, hence the updating of the genre.
Album opener and title track Weight of the world has pretty much a classic honky tonk feel despite the lyrics having a much more conteporary feel with Cahalen Morrison's expressive vocal as at home in pure country music as he was in a more folksy genre. That is followed by Ethan Lawtons Double or nothing a really strong song and yet one in which the vocal and the phrasing seems to include a little of the ska or rocksteady approach. Nothing wrong with that; perhaps it is as much a tempo thing but it certainly has a different sensibility although the instrumentation and indeed the arrangement are 'pure' country. Whilst that vocal is not exactly what you may expect in this genre, it certainly is a nice original update and the more you listen the more appeal it has. Cahalen Morrisons Sadder day is a slow moody ballad with a beautiful arrangement that takes us back to the late 1940s and early 50s and includes a lovely fiddle break. Ethan Lawtons In my cups is a speedy upper mid tempo country song on which the vocal works well but doesn't sound as if country is his natural habitat and yet there is a natural and quite upbeat atmosphere created around that distinctive vocal. There are chunky twangy guitars with steel, percussion, fiddle and bass on Jim Millers The long game an upbeat mid tempo country song that slots quite nicely into honky tonk and yet at times i'm reminded of the 'Band.' Maybe it's Millers edgy lead vocal that is sometimes reminiscent of the young Levon Helm, at least to my ears; whatever the reason it is an excellent song and performance.  Final mention goes to another Miller song which also happens to be the final song on the album. It is Rock salt, on which his vocal has a more pronounced similarity to the late great Levon and the Band and certainly on this song with thudding bass and percussion the sawing repetitive fiddle and some excellent twangy lead guitar and very good harmonies they are not overly flattered by the comparison. The differences in vocal styles and songwriting could easilly have led to failure but the fact that the three men have found a common ground in honky tonk has helped them to overcome any drawbacks. When you add that consistant sound provided by the  instrumentation and the tremendous arrangements the edges are taken off the differences and the listener is left with an excellent listening experience that is in and around modern day honky tonk.
I don't know if Western Centuries is going to continue into the future but I hope they do. All three members have revealed enough about their talent and musical likes to let us know that whilst they may keep the music rooted in honky tonk the variations that each brings to the band will continue to widen the boundaries and add a little more modernising diversity to a classic musical form.