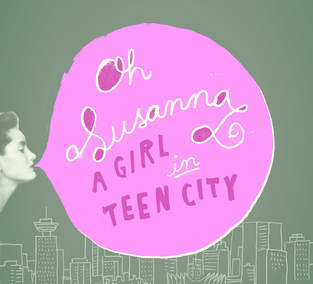 It's always a treat when you put a new album in the c.d player and within seconds of hitting the 'play' button you know this is a recording and an artist that is far above the mundane, actually having that almost indefinable ' something extra special!' Such an artist and an album is Oh Susanna and her new recording 'Girl in teen city.' Certainly many people have great talents but Suzie Ungerleider (her real name) definitely has that 'extra something' She is a 'real singer,' with an incredible ability to change the tone and texture of her voice to suit whatever tempo and emotional content a song requires. The fact that she is a gifted songwriter as well does no harm at all!
By my reckoning this is her seventh full length recording following on from her debut e.p way back in 1997, all from an artist whose consistent excellence must be the envy of most, if not all, of her peers. On this collection Suzie is supported by old friends and musicians Eli Abrams on bass, Cam Giroux on drums, Gord Tough on guitar, and producer Jim Bryson on guitar, keyboards and vocals along with several guest harmony vocalists, Holly McNarland, Gabrielle Giguere, Suzie’s sister Jessie and her niece Sofia.
As with previous Oh Susanna albums, there is a strong folksy element to this recording that can just as easily be slotted into the 'country' music racks and it's not difficult to imagine many of country's big stars slavering over some of these songs and being desperate to record them. It's no great act of perception on my part to say that the album takes a look back at the teen years of Suzie Ungerleider. The theme has been well publicized and is obvious to anyone with ears that this reflects on the past; the beauty of those reflections being that even the musical arrangement of the songs have a deeply reflective feel, thanks in large part to the work of producer Jim Bryson. They are very much stories of events remembered, warts and all, rather than a romanticized version of someone's teen years. Surprisingly on songs that are reminiscences, there is no disjointedness lyrically, with the words all flowing poetically rather than just trying to fit snatches of old memories into the gorgeous melodies.
The album opens with a gently strummed acoustic guitar intro on Flashlights, leading into Suzie's lovely feminine vocal on a mellow but quite dark song that wends its way slowly until midway when percussion and a treated electric guitar come in giving the song the feel of a gentle but epic tale. A suppressed guitar and Suzie's vocal get Lucky star going before the sound gradually evolves with warmth and depth created by the percussion and melodic guitar on a song that creates a similar reflective atmosphere to that of early Blue Nile albums. There is an urban late night street feel to the way the song progresses as it creates a deep misty atmosphere. The chiming piano and percussion start the song with Suzie's vocals on The darkroom at the school before a beautiful melodic guitar and treated keyboards come in to increase the haunting reflective nature of yet another tremendous song, one whose very title lets the listener know this is a moment when adult themes were explored! Tickets on the weekend starts with a chiming guitar, bass and percussion on another excellent story from the past and one that enables the listener to immerse themselves in the time and place where the story took place. It's almost as if Suzie is recording the lyrics as they come to her from her recollections, giving the song a more immediate feel. Waiting for the blossoms has a hauntingly treated keyboards laying down an atmosphere that the percussion and chiming guitar perfectly blend with and Suzie's powerfully evocative vocal on a song that strangely has the feel of reflecting on reflections! Eventually the piano joins in on this unusual but highly rewarding song
There is a warm femininity on this album that often holds the vocal appeal of the recordings made by the young Nanci Griffith, similarly you know that when you listen to an Oh Susanna album you are listening to someone who is not only at the top of their game but is also an example to her peers of what can be achieved, doubly so on this album that has such a powerful conceptual quality and continues to reveal more with every listening session. Buy this excellent album and let it wrap you in its warm varied reflections on one person's past. Who knows; you may even recognize the young you in some of the songs!