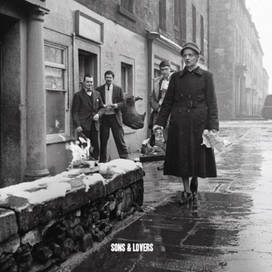 From Nottingham, DH Lawrence & the Vaudeville Skiffle Show describe their music as 'Upnorthicana music for the soul!' It is easy to see from their website that the band, if they can actually be referred to as such, don't take themselves too seriously, but thanks to the individuality and the degree of skill and feeling they bring to their playing it is fairly obvious that they do take the music much more seriously. The alert will have noticed that 'vaudeville' and 'skiffle' are mentioned in the band name. There is certainly a strong vaudevillian flavour and whilst there are recognizable skiffle elements don't expect this to be a reworking of the Vipers or Lonnie Donegan's Skiffle Men. The recognizable elements are kept to a minimum and often swallowed up by the originality of the 'Shows' writing, arrangements and performance. Skiffle, at least in England, was originally a simple music that was based on old American blues and hillbilly and played by young people whose skills, at least to begin with, were pretty basic. There are 'home made' elements in the makeup of this band but much more skill and originality than in that music of six decades ago.
I mentioned whether they can be referred to as a band simply because even they don't know exactly how many they are but there does seem to be a core of Misk Hills,  Minin' Bill with The Reverend Daniel Wright, Stevie Leigh-Goodison, Wailin' Nick Morland and a variety of other 'troubadours.' As to the aforementioned names, your guess is as good as mine as to the reality of them, although I suspect they may be pseudonyms!
They play everything from 'psycho-skiffle to lo-fi Country/Folk,' so again obviously they are not a 'classic' band from any genre in particular , but I am told they are extraordinary live, which, on the strength of this recording I find easy to believe and would be surprised were it otherwise. It probably goes without saying that they are influenced by 'local boy made good,' DH Lawrence, at least lyrically, with some dramatic tales in which there is very little redemption but some hugely rewarding music and considerable entertainment.
Album opener You Saw Me Fall gets under way with acoustic guitar and banjo supporting the lead vocal, with excellent fiddle and bass accompaniment on an excellent ballad that includes an edgy harmony on a song that has an unusual feel. The breathy ethereal female vocal takes a verse later in the song that actually becomes a duet. The title track Sons And Lovers has a nice 'hillbilly' edge with the soaring edgy vocal and high lonesome fiddle sound backed up by harmonies, guitar and snare on a song that is easy to imagine being played at an old 'lost holler' hoedown! A Needle and the Christ and A Soul Gone God Knows Where (phew!) is a real beauty of a sad heartbreaking love song with a melodic guitar sound, harmonica and excellent lead and harmony vocals. Drink Another Bottle is another excellent ballad with guitar and fiddle supporting the lone, evocative lead vocal. It gradually takes off with a tuneful electric guitar and percussion as the song speeds up on this sad tale of drinking to drown sorrows but one in which huge sympathy is engendered for the characters in this tale in which perhaps there is a little redemption? Following on from track eleven is a 'hidden track.' You won't want to miss that because it is a real beauty titled Seventeen and is the only song on the album that has a lovely female lead vocal. She is supported by acoustic guitar on an excellent folksy, dramatic tale of the ups and downs between two lovers, mainly downs on a quite addictive story!
The great thing about this band is that they place no real restrictions on song styles and with their home made 'punk' attitude everything is fair game. In adopting this path they have taken on a strong originality and a complete lack of inhibition that allows them to explore their musicality and to see how far they can take that exploratory nature. I suspect there is more to come from a 'band' who not only blend 'vaudeville' and 'skiffle' but also explore the outer reaches of a number of other sub genres. This is a hugely talented 'band' who have produced a debut album that will grace anyone's collection and is still revealing more good ideas than many produce in a full career.