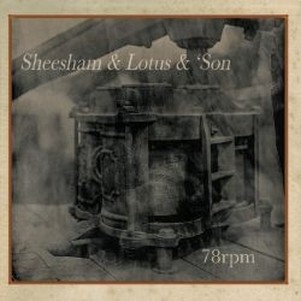 I love the music of Sheesham and Lotus and Son, something that will come as no surprise to anyone who knows me or has any idea of my musical tastes. I love the fact that bands such as this tremendous trio are resuscitating old music that goes back to the early days of recording and beyond. The fact is that not only are they hugely entertaining and highly skilled but more importantly they are keeping alive and giving a boost the 'traditional music' that back in the 1920s was their equivalent to 'mainstream music'  dependant on the location of the listener. It became known as 'hillbilly' or 'old timey' but overlapped into the blues, or 'race music' as commerce labelled it. To even half heartedly label them as 'covers bands' is quite ridiculous and disrespectful and it is due to the efforts of this band and a few other like minded souls that many of the old songs are being kept alive.
I played this extraordinary recording to a friend recently who readilly accepted my points but felt that this particular album may be a step too far and that instead of interpreting traditional music, because of the old recording techniques they were in many way caricaturing the 'old timers.' To be honest, because I was so caught up by the music, the atmosphere and the skills that had been put into making it, that point had completely passed me by. I can see why it was made but my feeling is that is of secondary importance but is certainly a viable point, dependant on the listener. No doubt many will agree with my friend but hopefully even more will agree with me. There are twenty one tracks on this album that was recorded by Lorna Fulton and Gary Malkin on a 1938 Presto 78rpm lathe which explains the authenticity of the recording quality. It can be argued that some of the songs are being taken back to their roots because the location of that machine on which the recording was made is Skegness in Lincolnshire, U.K. You can argue that perhaps that was not necessary but at worst it is an interesting historical experiment that enabled them to confront what the old timers had to deal with.
Whatever people think of the recording techniques the one thing that no one can disagree with is the fact that this is a band at the very peak of their interpretative skills who have made a remarkable album with this lineup of Sheesham Crow on fiddle and harmonica, Lotus Wight on banjo and 'Son Sanderson, tuba, with all contributing vocals. Much of the appeal of this band is that, exactly as the old timers did, they recognise no musical boundaries. Despite the fact that commercial recordings in the 1920s were subject to racism in as much as rural music was labelled either 'hillbilly' or 'race,' dependant on the persons colour but certainly not at the behest of the musicians. Many from both sides of the divide exchanged ideas whether consciously or by osmosis, with many white musicians having first learnt to play from black musicians, with their early influences coming from 'race' musicians and gradually from their own peers, both black and white. Sheesham and Lotus and Son recognise this and as a consequence can't really be labelled as 'hillbilly' or 'blues' but are fundamently both at the same time, as were those old timers albeit in varying degrees.
Many of these songs are rooted in the tales the immigrants have taken with them to the 'new world' over the centuries and can often be traced back several hundred years to Europe, having been adapted and developed over that time, in many ways exactly like Sheesham and Lotus and Son are doing now. The known 'writers' of some of these songs range from Charlie Patton to the Mississippi Sheiks and further afield to the East Texas Serenaders and yet some of those writers were taking perhaps a melody or a line or two of lyrics from much older songs and developing them in their own unique way. It would be pointless to mention any individual songs because they all have their merits and the flow of the recording is such that each of these pieces of history flows so authentically that the album is best listened to as a whole rather than in snippets.
The arguments over 'authenticity' and the need for it will no doubt continue but this is not only a reprise of those far off days of early recordings but also a hugely entertaining  album of songs and instrumentals in its own right, made by musicians of the highest quality who have a detailed and intimate knowledge of the music both they and I love. As good a bunch of reasons to make an album as I can think of!